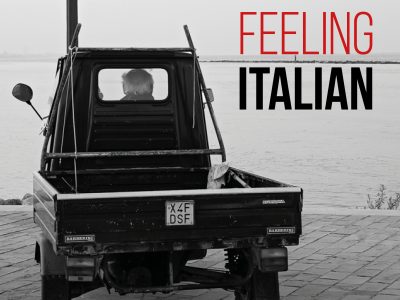 More than a photobook about what it means to feel Italian today . 89 photographs selected by an international jury show images of the Italy of today. A country in transformation in a global context, in terms of behaviors, customs and values and, at the same time, a country linked to traditions and elements of continuity with the […] Read More 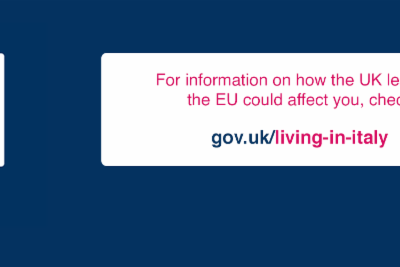 HMA Jill Morris CMG would like to invite you to a Town Hall meeting for UK Nationals on citizens’ rights and EU Exit. on Wednesday 17 July 2019, from 6:00pm to 7:30pm.   Address: All Saints Anglican Church Via del Babuino, 153 00187 Rome St Thomas Room (entrance is via the garden gate in Via […] Read More 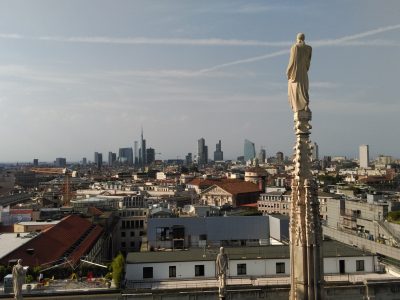 Milan: Mixing Old with the New

As an American, one thing that strikes on your first trip to Europe is the history. The relative age of North America is nothing compared to that of the European continent. Buildings of historical significance here can easily be two or three times as old as the historical sites in the United States. The same […] Read More 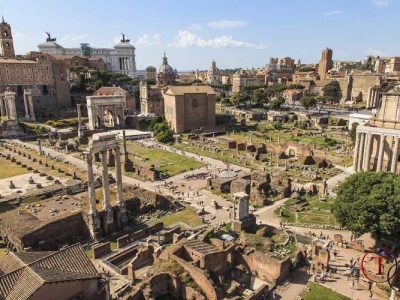 Day 1 Rome is truly one of a kind. It is filled with incredible buildings and architecture, ancient ruins from the great Roman Empire, and some of the most important religious landmarks in the world. The most difficult part about a trip to Rome is narrowing down a list of the best things to see […] Read More 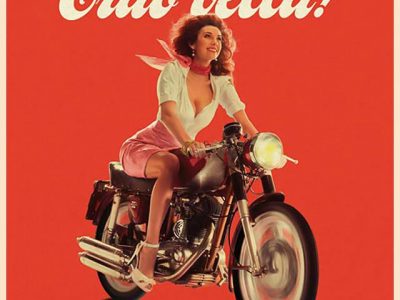 So, the time has come to leave Italy – maybe your assignment here has finished, or you may have decided to move somewhere else. In either case, certain steps must be taken to wind down your life in Italy to avoid having to deal with issues long after you leave, if your departure is […] Read More 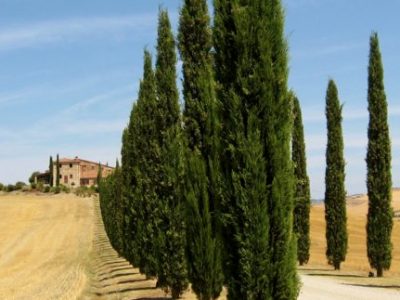 The Lure of Italy: Where is the best place to live?

The almost definitive guide to where to live in Italy. The lure of Italy is indisputable. History, culture, culinary tradition, stunning landscapes… and naturally so many beautiful people. You’re smitten, what’s not to like? A great dilemma for many considering a move to Italy is finding the right answer to “where is the best place […] Read More 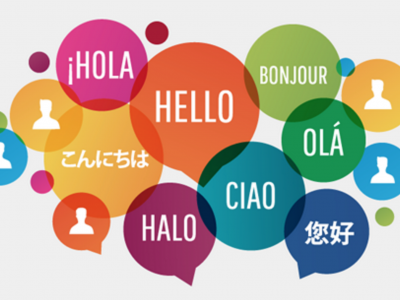 A month or so ago, I found myself wandering the streets of an unfamiliar town in northern Italy as I checked Google Maps on my phone for a specific address. As I rounded the corner in proximity to my destination, a sign caught my eye that made me stop in my tracks. I saw the […] Read More 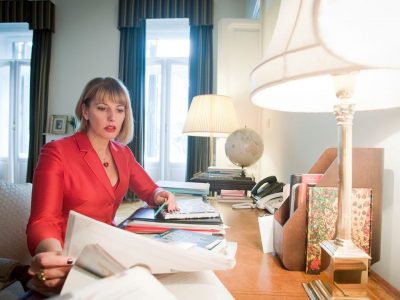 A message from HM Ambassador Jill Morris – Issue No. 11

A MESSAGE FROM JILL MORRIS, HER MAJESTY’S AMBASSADOR British Embassy Rome Issue No. 11 Wednesday 5 June 2019   I wanted to update you following the passing of the Italian No Deal decree through the Italian parliament.   Italian Government No Deal contingency planning The Italian decree on No Deal planning was published on 25 March. […] Read More 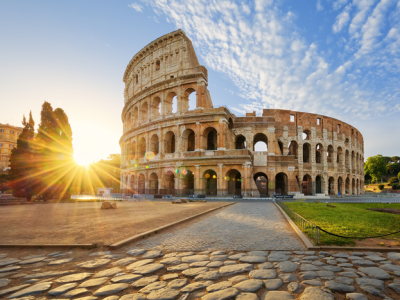 Whether it has been your dream to move to live in Italy for a lifetime, or if you are moving here for another reason, below you will find a series of steps that you should ideally do before you arrive in Italy or immediately after you get here. Planning ahead of your permanent move to […] Read More

HMA Jill Morris CMG would like to invite you to a Town Hall meeting for UK Nationals on citizens’ rights and EU Exit. on Wednesday 29 May 2019, from 5:30pm to 7:00pm. Address: Anglican Church of the Holy Cross Via Roma 118b (all’incrocio con Via Mariano Stabile) Please use side entrance on Via Mariano Stabile […] Read More

HMA Jill Morris CMG would like to invite you to a Town Hall meeting for UK Nationals on citizens’ rights and EU Exit. on Thursday 9 May 2019, from 6:30pm to 7:45pm. Address: St George’s Anglican Church Campo San Vio, 20123 Venice   Nearest Vaporetto stops: Accademia/Salute.   Due to limited space, we ask that […] Read More 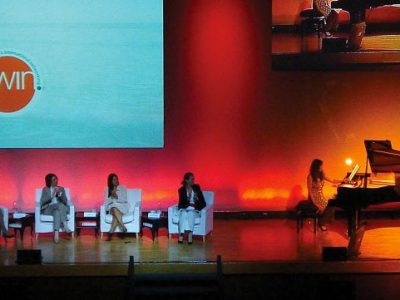 Decades ago courageous women in various parts of the world broke the silence and started a fight against a social norm that prevented women from having access to professions and right that were prerogative of men. In those years, the fight was for greater gender equality. Today this slogan has been replaced by gender parity or […] Read More

A message from HM Ambassador Jill Morris – Issue No. 10

A MESSAGE FROM JILL MORRIS, HER MAJESTY’S AMBASSADOR British Embassy Rome Issue No. 10 Friday 5 April 2019 I wanted to update you following the publication of the Italian government’s No Deal Decree on the 25thMarch. Italian Government No Deal contingency planning On the 25th March the Italian government published Decreto-Legge n.22, 2019 which outlined their contingency plans […] Read More

The British Embassy staff would like to invite you to a public Q&A session for UK Nationals on citizens’ rights and EU Exit. on Thursday 11 April 2019, from 6:00pm to 7:30pm. Address: University of Turin, Campus Luigi Einaudi, Room E1 Lungo Dora Siena 100 Turin We encourage you to distribute this invitation to other British […] Read More 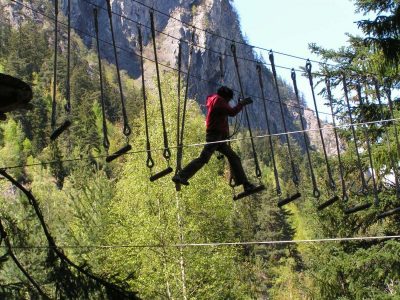 Adventure Parks in Italy – great time for friends and family!

Adventure parks (parchi avventura) are a fairly new phenomenon in Italy, but there are quite a few that are really worth visiting. On top of being great places where everybody, children and grown ups, they will give you the chance to see Italy in a different light. You can have lots of fun, feel the […] Read More

Dear Readers, We have reached the end of the 2018-2019 financial year and as a Mission we begin to take stock of our achievements that have been made through the year, and we look forward to our activities that will shape our interactions with Northern Italy in the 2019-2020 financial year. In 2018 the Mission […] Read More 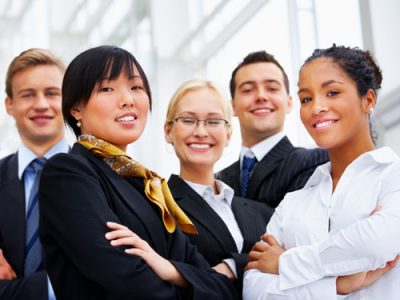 “In an era where global vision and cross-cultural competencies are critical to business success, multicultural upbringing can be far-reaching. Multilingual, highly-skilled and international experienced, they have unique skills and abilities that enable them to function more effectively in a global business environment.” Born in New York to parents of Chinese origin, Amie received her college […] Read More

The British Embassy staff would like to invite you to a Q&A session for British nationals on the topic of citizens’ rights. on Tuesday 26 March 2019, from 6:00pm to 7:30pm. Address: Church of the Holy Ghost Distacco di Piazza Marsala, 3 16122 Genova We encourage you to distribute this invitation to other British nationals […] Read More 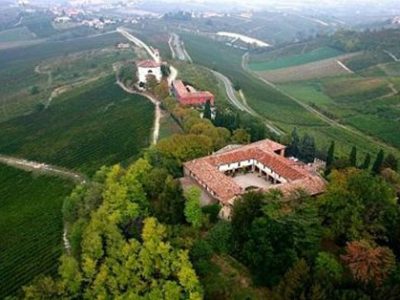 History, wine and nature in a glass… or two!

As they say, life’s too short to drink bad wine, which is a perfect reason for visiting Val Tidone! Just an hour’s drive south of Milan will put you in the center of a landscape that is characterized by endless waves of vineyard creating glorious panoramas. The terroir of the Val Tidone is perfect for […] Read More 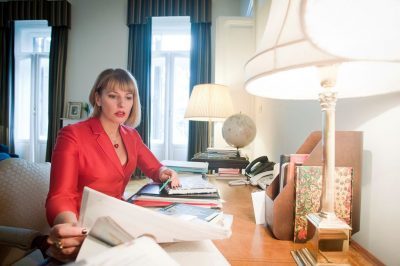 A MESSAGE FROM JILL MORRIS, HER MAJESTY’S AMBASSADOR British Embassy Rome Issue No. 8 Wednesday 30 January 2019     Following the vote in Parliament on 15 January and the Prime Minister’s statement to the House of Commons on 21 January, as well as the events in Parliament yesterday,  I wanted to update you on […] Read More 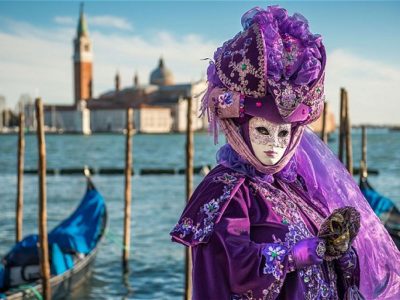 When thinking of the Carnival, two cities stand out from the rest of the world, Venice and Rio. Given the cold temperatures in Italy since the start of 2016, my pick would definitely be Rio, but as I live in Milan with my wife and two small children, let’s talk about a more realistic travel option, […] Read More 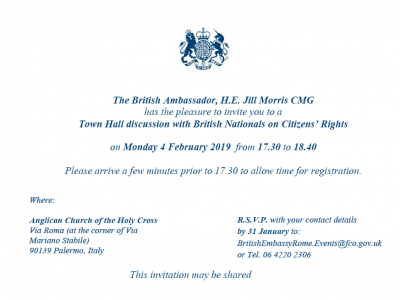 The British Ambassador, H.E. Jill Morris CMG has the pleasure to invite you to a Town Hall discussion with British Nationals on Citizens’ Rights on Monday 4 February 2019 from 17.30 to 18.40 Please arrive a few minutes prior to 17.30 to allow time for registration. Where: Anglican Church of the Holy Cross Via Roma […] Read More 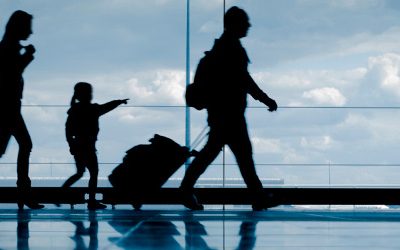 Like international couples, my wife and I travel abroad frequently, often to spend time with family and friends. For expats, traveling is like brushing your teeth, something you do on autopilot without giving it much thought. Well, at least that was the case before you had kids. Now this has become something far more challenging. […] Read More

A MESSAGE FROM JILL MORRIS, HER MAJESTY’S AMBASSADOR British Embassy Rome Issue No. 7 Monday 24 December 2018    Following the European Councils in November and December and announcements by the Italian government, I wanted to update you on issues related to the question of Citizens’ Rights.   Latest Developments On the 25 November, at […] Read More 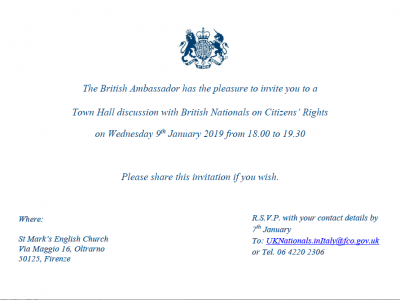 The British Ambassador has the pleasure to invite you to a Town Hall discussion with British Nationals on Citizens’ Rights on Wednesday 9th January 2019 from 18.00 to 19.30 Please share this invitation if you wish. R.S.V.P. with your contact details by 7th January To: UKNationals.inItaly@fco.gov.uk or Tel. 06 4220 2306 Where: St Mark’s English […] Read More

Dear Readers, The year has gone by quickly and we already find ourselves at the conclusion of a very busy but fruitful 2018. Although not the end of the financial year and with still many activities for the Mission to undergo, there have been some notable highlights to the year which you have undoubtedly read […] Read More 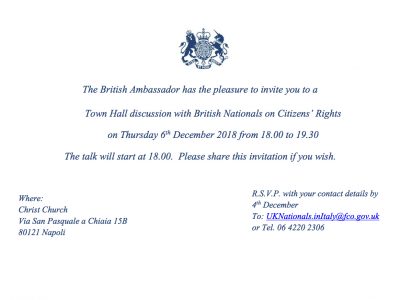 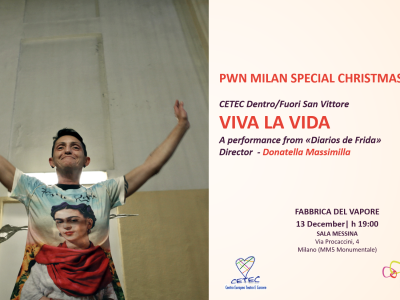 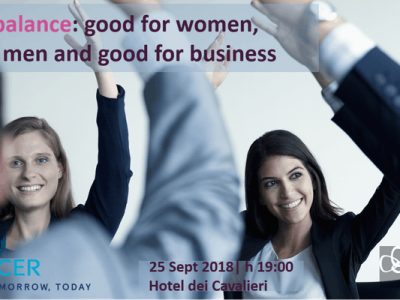 A Message from Jill Morris, Her Majesty’s Ambassador British Embassy Rome From Issue No. 6, 14 September 2018 newsletter to British nationals in Italy. Following the publication of the UK’s White Paper on the future relationship with the EU in July 2018, I would like to update you on the state of negotiations and what […] Read More 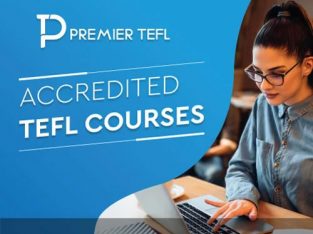 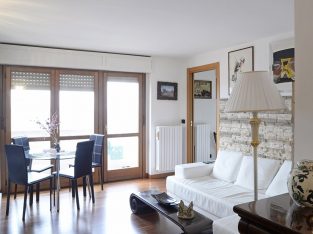