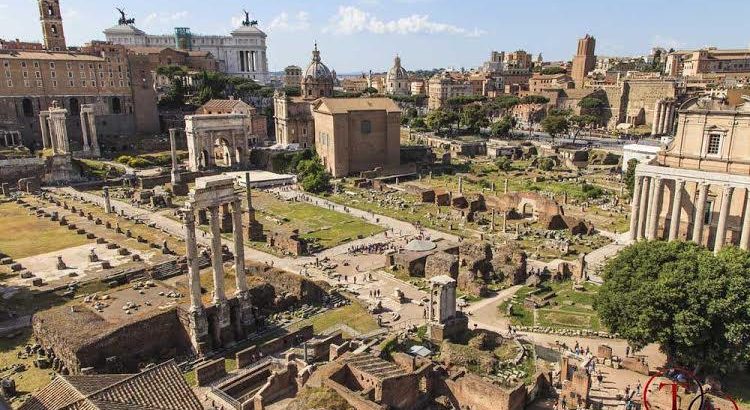 Rome is truly one of a kind. It is filled with incredible buildings and architecture, ancient ruins from the great Roman Empire, and some of the most important religious landmarks in the world. The most difficult part about a trip to Rome is narrowing down a list of the best things to see in a weekend because there are just so many, but this trip is a compilation of as many amazing sites as can be squeezed into two days.

The trip starts at the Vatican City and St Peter’s Basilica. The Basilica is one of the most important buildings in all of Christianity. Built on the site of St Peter’s tomb, the massive structure houses incredible works of art and sculptures such as Michelangelo’s Pietà. There is also the incredible baldachino over the altar. This church is free to enter, but will take a while to get into due to security checks in St Peter’s square. While waiting you can admire the fountains, obelisk and large colonnades. Tickets can also be bought in the basilica to climb to the top of the dome (la cupola) for €5-7.

The next destination is the Vatican Museums, which include the Sistine Chapel. Due to massive lines, you will want to purchase a ticket before you go, which can be done at www.biglietteriamusei.vatican.va. The cost is €27 with an audio guide, which is highly recommended because the guide explains a lot of things that would otherwise be missed. The highlight is the Sistine Chapel, which lives up to its reputation, but there are many other fantastic pieces of art such as those in the Galleria delle Carte Geografiche (Gallery of Maps). The museum is very large, so expect to spend around three hours inside of it.

After the museum, grab some lunch at one of the many nearby restaurants. To get away from the bustle of tourists walk at least a few blocks from the Vatican City to somewhere like Ristorante Krugh for a more relaxed lunch.

After lunch head to the Castel Sant’Angelo, which looms over the Tiber River. This huge castle was originally intended to be a mausoleum for Emperor Hadrian but eventually became a prison

and military fortress. Now it is a museum and visitors can climb to the top of the castle for a great view of the Tiber. Admission is only €8 and tickets can be purchased at the door.

Walk across the Ponte San’Angelo for a beautiful view of the Tiber and begin making your way to the Piazza del Popolo, the People’s Square. The piazza is very large and in the center is the Flaminio Obelisk. The obelisk is one of the tallest in Rome, and is surrounded by a large fountain with statues of lions that spit water from their mouths. There are also other statues and fountains in the piazza and it is a good place to relax, take in the sites, and watch the bustle of Rome.

The last stop for the day is the Spanish Steps. These famous steps are free to go on and are one of Rome’s most popular spots. The stairs lead up to the Trinità dei Monti church at the top, and at the bottom is the Fontana della Barcaccia. After taking a seat on the steps have dinner close by somewhere like Il Gabriello.

The final day of the trip begins at the Roman Forum and Palatine Hill. You can buy tickets there

or purchase them in advance, which can save a lot of time. For the price of €14 you are allowed
access to the Roman Forum, Palatine Hill and Colosseum. The Roman Forum is an amazing sight to behold. The area the ruins cover is quite large and there are many different pieces, some still in fairly good condition. It is an amazing experience to walk amongst the ruins and try to imagine what the area looked like thousands of years ago. After roaming the forum, climb the Palatine Hill for a spectacular view of the city and get a look at the Colosseum just a short distance away.

The exit from the Palatine Hill leads right to the Colosseum, which is incredible to see up close. The massive structure was built in 70-80 AD and was created as a place of entertainment for the
people of the city. The Colosseum hosted gladiatorial fights and shows. Once inside multiple levels can be toured for an excellent view and perspective of the arena. Right next to the Colosseum is an excellent lunch spot, Café Café. This quaint little café is just a block from the Colosseum, but it is like an oasis, quiet and removed from the busy street and crowded restaurants on the main road. Try the prosciutto panini or a Margherita pizza!

The next stop is a controversial one for Romans, Il Vittoriano. Built as a monument for Victor Emmanuel II, the first king of Italy, the massive white marble structure looms over the Roman Forum. Most Romans say the monument is gaudy and too big, referring to it as the typewriter. Like it or not though, you can’t miss it and it is still impressive to see. It is also free to go inside and go on the first balcony. Visitors can pay to go up an elevator on top to see a view of the city on top, but the Palatine Hill provides an equally impressive one.

After Il Vittoriano the next landmark is the famous Trevi Fountain. The huge structure is the largest baroque fountain in Rome. At the center is Neptune, with two tritons on either side. While at the fountain, be sure to throw a coin over your shoulder into it, as legend says this ensures a return trip to Rome! Near the Trevi Fountain is the Pantheon, an ancient temple for Roman gods built between 118-125 AD. This building is the
best kept of the ancient Roman buildings and is free to enter. The detail and skill required to build the temple is fascinating to see.

The final stop of the trip is the Piazza Navona, another huge square. This square personifies Rome like some of the other landmarks of the city, complete with three fountains including the central “Fountain of Four Rivers”, which contains a large obelisk. To end your trip grab dinner at one of the many places around Piazza Navona and begin planning a return trip to see more of the amazing things Rome has to offer!