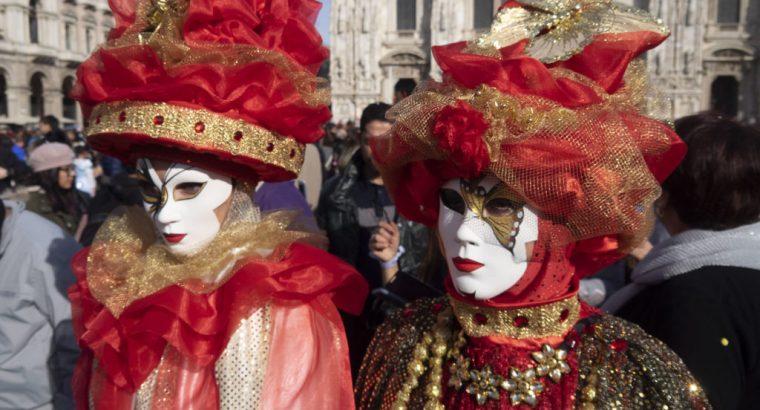 It’s the last day of celebrations before the forty-day period of Lent (a period of penitence and fasting) before Easter. Carne means meat, vale means farewell or goodbye in Latin, hence Carnevale means farewell to meat before the 40 days of Lent. Carnevale was the last day to eat meat and other rich delicacies before abstaining for Lent. Wearing masks and costumes was a way to hide one’s identity, social class, and inhibitions on this day of frolicking festivities.

Carnival falls on a different day each year according to the liturgical calendar. This year, Shrove Tuesday or Fat Tuesday, will fall on  February 16. The carnival period formally began on January 31st: the Catholic Church in fact sets the Sunday of Septuagesima – about 70 days before Easter Sunday – the beginning of the Time of Septuagesima or Carnival, this year precisely on January 31st. Then on February 11, will be Thursday before Lent, the 14th of February  will be  the Sunday of Carnival  and February 16 will indeed be celebrating Fat Tuesday (mardi gras) which marks its end. The following day is celebrated on Ash Wednesday which opens the period of Lent.

The Ambrosiano Carnival celebrated in Milan starts on the first day of Lent and ends on the Saturday after Ash Wednesday.

Note: Due to Covid-19 restrictions 2021 parades and events will not be held.

In various locations throughout the city, there are usually events and activities for all, including families and children. Piazza Duomo and the surrounding areas are the main locations for festivities. Street performers, clowns parades and concerts all day and evening long.

Menghino and his wife La Cecca,  characters invented by burlesque comedy play-write Carlo Maria Maggi. Meneghino was the term used for sixteenth-century Milanese butlers who accompanied noblemen and women in their carriages. They became symbols of the honest, hard-working, joyful Milanese.

What to eat at Carnival

A light pastry fried and sprinkled with powdered sugar or glazed with chocolate. You can find them in any and every bakery or pastry shop at Carnival time.

There is no formal expression for Carnival, people say “Buon Carnevale” Happy Carnival or simply “Auguri“, Best Wishes. The main thing is to have a bit of fun- “Divertiti!”