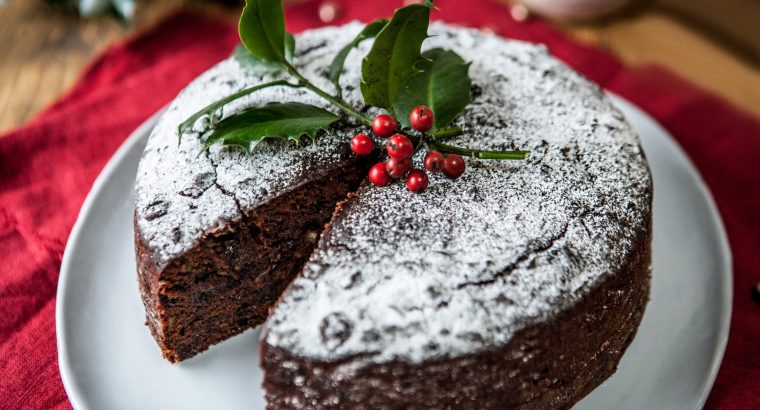 Christmas cake is an English tradition that began as plum porridge. People ate the porridge on Christmas Eve, using it to line their stomachs after a day of fasting. Soon dried fruit, spices and honey were added to the porridge mixture, and eventually it turned into Christmas pudding. In the 16th century, oatmeal was removed from the original recipe, and butter, wheat flour and eggs were added. These ingredients helped hold the mixture together, resulting in a boiled plum cake. Richer families with ovens began making fruit cakes with marzipan, an almond sugar paste, for Easter. For Christmas, they made a similar cake using seasonal dried fruit and spices. The spices represented the exotic eastern spices brought by the Wise Men. This cake became known as ‘Christmas cake’.

I personally am not a fan of fruit cakes, but my Dad is and he and others swear that this is the best fruit cake they have ever had. Consequentially I have stopped looking around for other recipes and this recipe by Nigella Lawson and Hettie Potter is my go to fruit cake. As with all rich fruit cakes, it should be made at least 3-4 weeks before you plan to eat it. However as per British tradition I make it at least 3 months before (and even a year if I can) in order to let it mature and also to be able to feed it with Sherry or Brandy into the cake every couple of weeks.

1. Place all the dried fruit in a large bowl, and add the sherry or brandy. Cover it and let it soak overnight,
2. The next day, preheat your oven to 150C. Line your tin with a double layer of greaseproof paper or baking parchment. The paper should come up a good 10cm higher than the sides of the tin
3. Cream the butter and sugar together, then beat in the orange and lemon zest.
4. Add the eggs one at a time, beating well after each addition, and then the marmalade.
5. Sift the dry ingredients together, then mix the soaked fruit alternately with the dry ingredients into the creamed mixture, combining thoroughly.
6. Put the cake mix into the prepared tin and bake in the oven, for 2.5/3hours or until a cake-tester or skewer inserted into the cake comes out clean.
7. When the cake is cooked, brush with a couple of extra tablespoons of extra liqueur. Wrap immediately in its tin – using a double-thickness of tin foil – as this will trap the heat and form steam, which in turn will keep the cake soft on top.

When it’s completely cold, remove the cake from the tin and rewrap in foil, storing, preferably in an airtight container.