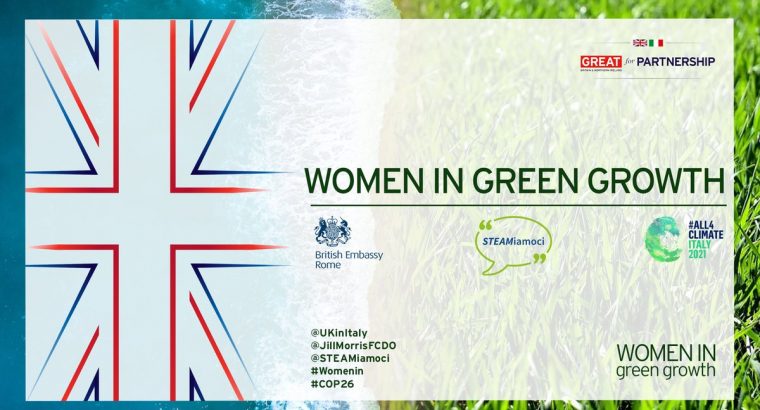 The Women in Green Growth webinar was held 17 March 2021 , organized by the British Embassy in Italy with  STEAMiamoci, a project launched in 2016 with the aim of reducing the gender gap, supporting the importance of women in the cultural and productive fabric, and to find and develop ways to increase inclusion and value.

Part of the Women in … series of events  promoted by Ambassador Jill Morris since her arrival in Rome in 2016, the event  is  also part of the All4Climate campaign   promoted by the Italian Ministry of Ecological Transition: a busy schedule of events that will take place throughout Italy during the year, with the aim of promoting 2021 as the year of the Climatic Ambition, in view of the pre-COP in Milan and the COP26 that the United Kingdom will host in Glasgow in November.

After the institutional greetings of ambassador  Jill  Morris  and  Anna  Carmassi, Project leader of  STEAMiamoci,  it  was the journalist of Corriere della Sera,  Silvia  Sacchi, who moderated the interventions divided into two distinct sessions.

The first part of the webinar talked about  women entrepreneurs and the environment, and how they contribute to the green economy. The rich program saw the interventions of  Barbara Amerio,  Permare Group, and  Cristiana Talon,  GS4C, Gabriella Pasi, Director for the internalization of the Milano-Bicocca University and  Alessandra Lucini Paioni, a young PhD student in the chemistry sector. . Participants told their stories of the challenges they faced while emerging in industries such as- boating, education and chemistry – generally  dominated or characterized by a strong masculine presence.

British Ambassador  Jill  Morris  commented on the occasion: “Gender inequality is not just a moral issue, it is an economic and environmental issue . It is our task to inspire the new generations of women through the enhancement of female excellence. In particular, today we focused on entrepreneurship and green finance, one of the pillars of the COP26, whose summit will be hosted in Glasgow in November next . ” The Ambassador then continued, “Green finance is the basis of all other COP campaigns: adaptation and resilience, energy transition, nature and zero-emission vehicles. Without the right levels of funding, the shift towards a sustainable economy is not possible. And for the change to be effective, it is necessary to involve the whole of society, firstly women”.

Anna Carmassi , Project leader of  STEAMiamoci  commented on the initiative as follows, “The world questions us about our economic models and our values, it asks us to reinvent our production realities. Solutions require STEM skills which are and will be the skills of the future. Hence the urgent need to also mobilize female talents to build, together, a perspective of health, stability, equity, sustainability ”.