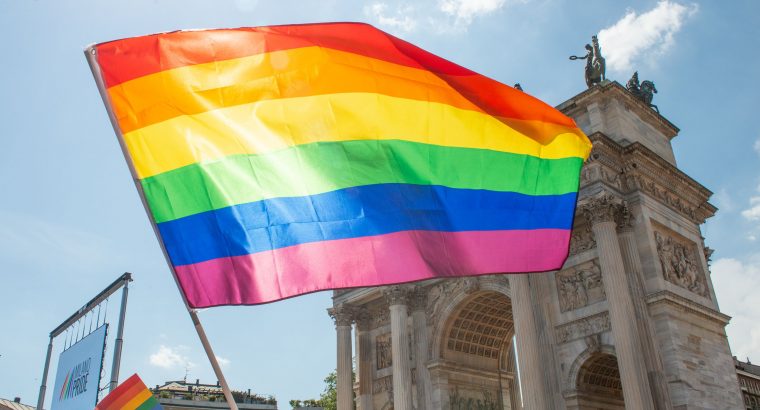 Milan is tinged with the rainbow and asks for rights for all, a guarantee of democracy and freedom. The Pride Week calendar is underway with initiatives spread throughout the city, with then the rich Pride Square scheduled for June 30 and July 1 in Porta Venezia: debates, talks, art and culture. A focus on the 50th anniversary of the Sanremo ’72 event, but also international rights, health and moments for the little ones. On July 2, a new parade will bring the colors of the LGBTQIA + community to the streets to arrive in Arco della Pace, where the big final event will take place, which this year doubles until midnight.

THE EVENTS: FOCUS ON RIGHTS, HISTORY OF THE MOVEMENT, ACTIVISM BEYOND ART, CULTURE AND THEATER

Events begin  June 16 Pride Week, now in reality much more than a single week thanks to the wealth of initiatives present: starting from the Mix Festival , the LGBTQ + film and queer culture festival, now in its 36th year, countless events appear on the city’s rainbow calendar.

The culmination of the Milano Pride festival formula will be the Pride Square, on 30 June and 1 July, in three squares in the Porta Venezia district: talks, debates, art and culture, as well as moments dedicated to families and children. In addition, a monitoring of health and prevention.

In Largo Bellintani : rapid and free HIV and syphilis tests, as well as infopoints on sexual well-being, thanks to the Milano Checkpoint. Piazzale Lavater and Piazza Santa Francesca Romana will be dedicated to meetings, debates and presentations, as well as artistic moments. Interpreting in LIS will be available for all events.

Among the Pride Square events to be held:

LGBT + rights beyond the iron curtain

A focus on the state of rights, but also on activism and the work of associations, in the countries of former Soviet bloc: what are the difficulties and challenges? With Olena Shevchenko (Insight, Ukraine); Giorgi Tabagari, (Tiblisi Pirde, Giorgia), Aleksandr Voronov, (Coming Out association, Russia). Moderated by Yuri Guaiana from AllOut and Roberto Muzzetta from Arcigay.

Two events with the roots of pride: the first time OUT! and a discussion between activists * on the evolution of the movement

On 30 June Giorgio Bozzo, author of the podcast Le Radici dell’Orgoglio, interviews Riccardo Rosso, one of the participants in the first public demonstration of the Italian LGBTQIA + movement, which was held on April 5, 1972 in Sanremo. The next day we will continue with the discovery of some central figures in the various decades since the 70s and reflect on how the community has changed, its objectives, comparing activism over the years.

I am beautiful in my way: we sing the pride of being ourselves  June 30th, 7.00 pm – piazzale Lavater

Checcoro, the first LGBT + choir in Milan, returns with its now traditional concert: through the universal language of music we communicate and we create a multifaceted, open and inclusive society.

The sexuality of “non-conforming” bodies

An interesting dialogue with several voices on the theme of sexuality and how it is lived and experienced by those who have a body considered “different”: we will talk about people transgender, fat people and disabled people. What are the political themes of this aspect? With Elisa Manici (author and activist on the topic of fatophobia), Elisa Ruscio (transgender popularizer), Riccardo Onorato (content created body positive) and Andrey Chaykin (Disability Pride)

How does the future of a law against hate crimes look like? What are the challenges, difficulties or strengths? The Senators Simona Malpezzi and Alessandra Majorino address the issue.

Reading of fairy tales with drag queens – for young and old

The appointment dedicated to children and their families is renewed again this year. With the irony that distinguishes it, La Wanda Gastrica will entertain its budding audience with a reading of stories, giving new color to characters handed down for generations.

Starting from Italy, the emphasis will be on the limits of civil unions and the differences with the rest of the European countries, then deepening the scope of the rights of homogenitorial families and especially of children.

Starting from a reflection on how differences in school and youth settings are treated and perceived, we will broaden our gaze on how develop a present that is inclusive and open, in which children can grow up peacefully and with full self-awareness. With the CIG Arcigay Milano School Group, Virginia Dascanio of Rete Lenford and the contribution of Blue Phelix.

Antigone bookshop: two book presentations in dialogue with the authors

Two moments dedicated to books and further study, with a dialogue with the authors. On June 30th we will talk about “Queer, antispecist and international conspiracies” with the author Marco Reggio and Hanay Taja of the Ippolita Group. On July 1st, however, we will present “Barba. Story of how I was born twice ”, together with the author Alec Trenta. Led by Mauro Muscio of the Antigone bookshop.

Italy on the pitch against homophobia

Arcigay Sport and Pride Sport Milano, the association that brings together all the LGBTQIA + sports groups in the city, speak of homophobia in sport but also of virtuous stories. In fact, the awards are given for people and organizations that have distinguished themselves as LGBTQIA + friendly.

D&I in tourism, in Italy and in the world

What is D&I and what is the situation in Italy? A focus on the world of tourism also in view of the international convention of LGBT + tourism to be held in Milan in October 2022. Igor Suran (Parks, Liberi e Uguali) and Giovanna Ceccherini (AITGL – LGBTQ National Tourism Organization) will be present

All events will soon be viewable on the Milano Pride website and its social channels. 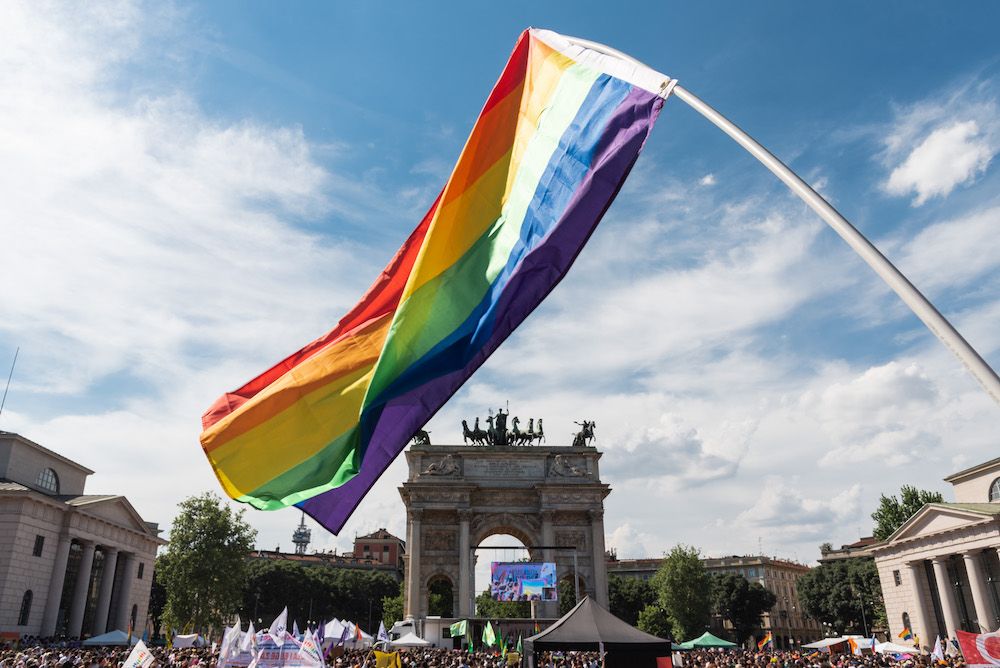 2nd JULY: THE PARADE AND A GREAT FINAL EVENT, WHICH DOUBLES THIS YEAR

Saturday 2nd July, the parade returns, the event that will make the streets of Milan explode with colors, this year with a new path that embraces the city.

The concentration will be in via Vittor Pisani, in front of Piazza Duca d’Aosta in front of the Central Station. The head of the procession will start from Piazza Repubblica at 3:00 pm to continue along viale Monte Santo, the Bastioni di Porta Nuova, piazza XXV Aprile, the Bastioni di Porta Volta and viale Elvezia, until arriving in front of the Arena: here the parade on foot he will cross the park to then reach  Arco della Pace.

Right in Arco della Pace from 18:00 the big final event, this year longer to allow the rainbow community and the whole city to fully enjoy the final moment of the event: there will be the claims of the LGBTQIA + associations and their guests, greetings from the institutions, as well as moments of entertainment and music that will make the participants dance until midnight.

For the first time there will also be a symbolic award ceremony for the reality that will have set up the wagon considered most eco-friendly: environmental issues are at the forefront of the organizers’ mind, which encourages participants to parade taking into account the rights of the planet. .

The LIS interpreting service will be present during the event.

The whole event will also be available in streaming on the Milano Pride YouTube channel thanks to the collaboration with Fastweb.

THE MESSAGE: RIGHTS WITHOUT CONFLICTS

“The rights of men must belong to all men, proper to all, otherwise call them privileges”  said Gino Strada, founder of Emergency. Rights without conflicts is the title of the political document of Milan Pride 2022. “We want a society of Peace, Democracy and Rights” This is the true mission. “A society where intellectual, moral, economic resources, collective thought, political planning, education are aimed at building the common good, overcoming conflicts, moral and material progress, without any distinction and discrimination. When even a single person is deprived of dignity, physical and psychological integrity, equal access to education, housing and work, due to their gender identity, sexual orientation, origin, religion or any other reason, the whole society is fragile, exposed to conflict and unjust. ”

A reflection on the theme of war is seen as a duty in this edition, as well as the solidarity with the resistance of the Ukrainian people – also made up of LGBTQIA + activists – against the war of conquest waged by Russia.

The Rainbow Social Fund, the fund dedicated to social projects and cultural initiatives, dedicated to those in need of support, inside and outside the LGBTQIA + community, is precisely in the spirit of solidarity.

The Milano Pride is in fact also an important fundraising opportunity: born thanks to the proceeds of the Pride net of living costs in 2020, today the Rainbow Social Fund also feeds on other contributions received during the year – in order to create value added for the society that surrounds us and provide real support to those who need it most: concrete actions that demonstrate the open and inclusive soul of the city of Milan.

Among the projects supported through the Rainbow Social Fund we find: a contribution to EPOA fundraising for LGBTQIA + activists in Ukraine; assisted housing for asylum seekers who flee their countries for discrimination related to sexual orientation and gender identity; legal assistance for victims of homotransphobic crimes; support for the Mix Festival as a cultural value of the city of Milan.

There are numerous Italian and international brands and companies from different sectors that support Milano Pride, actively contributing to the Rainbow Social Fund and taking the side of rights.