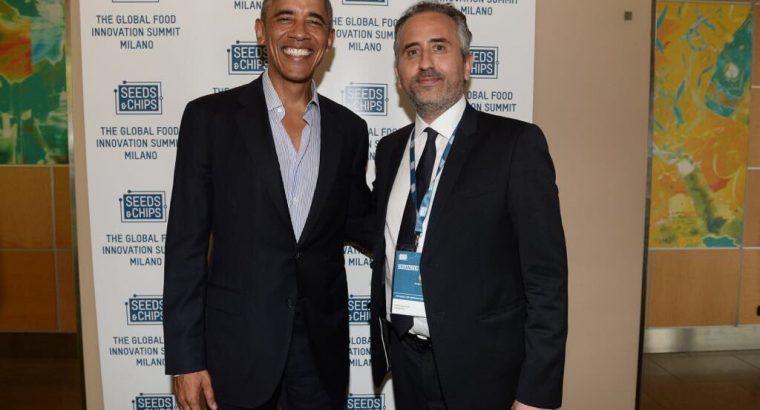 From May 8th – 11th, food innovators and enthusiasts from around the world gathered at Fiera Milano for the collaborative exhibition between Seeds&Chips, a food and agricultural technology summit and TuttoFood, an expansive food industry trade show. The event, attended by more than 80,000 people from 141 countries, showcased all aspects of the food and beverage trades. Additionally, Seeds&Chips featured dozens of conferences and provided opportunities for leaders in both public and private sectors of the diverse food supply chain to network and address success and challenges of the industry.

One such challenge was highlighted in the keynote address by former United States President Barack Obama: the role of agriculture in climate change. In his first international address since leaving the presidency, Mr. Obama was enthusiastically greeted by a diverse audience ranging from giddy teenagers glued to their cellphones to impeccably dressed professionals sporting translation headphones. Climate change, a defining component of Mr. Obama’s presidency and one that he states “will define the contours of this century,” is a topic most often defined by energy usage and the associated pollution. While energy is the largest contributor to greenhouse emissions, it is far from the only factor.

In his prepared remarks and in the discussion that followed, Mr. Obama addressed the intersection of climate change and the global food supply while gracefully sidestepping questions about President Trump’s policies on both topics. Mr. Obama’s statements connected climate change to instability in weather patterns that have caused gaps in food availability and rising food prices, increases in conflict, and human diaspora. With an audience of innovators, policy-makers, and innovators, he took the opportunity to delve into the inverse of this relationship, focusing on problems and solutions pertaining to agriculture as a driver of climate change.

Mr. Obama and his panel interviewer, former senior policy advisor in nutrition, Sam Kass, discussed in detail the difficulties of confronting food as a major contributor to climate change as well ways to address this obstacle. Many people understand the connection between energy usage and climate change, Mr. Obama noted, due to strong visual pollution cues and longstanding awareness campaigns, but these are factors that have not fully emerged for agriculture’s role in global warming. Additionally, Mr. Obama and Mr. Kass agreed that food is a cultural, emotional, and personal topic, making conversations and policy subject to greater levels of sensitivity and scrutiny.

Another challenge lies in the fact that agriculture is an essential industry in most nations; Mr. Obama stressed that changes must be beneficial to farmers and consumers alike and emerge at a community level for successful implementation. However, advances in science, technology, and innovation stand to greatly revolutionize the industry with potential benefits for citizens in developing and industrialized nations alike for generations to come. With a nod to the many industry leaders and policymakers in the audience, Mr. Obama noted that “the path to a sustainable food future will require unleashing the creative power of our best scientists, and engineers and entrepreneurs, backed by public and private investment, to deploy new innovations in climate-smart agriculture.”

After fielding questions on the role of food in healthcare and personalized medicine, the issue of food waste, and past and present crop technology, Mr. Obama circled back to the theme that he is most often associated with: hope. In a comment highly appropriate for an audience of entrepreneurs, he suggested that young people today are seeking to make a difference through creating and running businesses and nonprofits over a route in politics and concluded that “we need good contributions from all sectors to create a better world.” The discussion finished with two letters from children and Mr. Obama’s simple, hopeful response that we can all make a difference by starting with small, tangible changes.

As the audience exited the conference, many wandered into the next room of the exhibition hall and through displays of innovative agricultural solutions ranging from vertical gardens and vegetarian meats to new items created from previously discarded industry byproducts. It would have been difficult for Seeds&Chips attendees to step away from the week without feeling inspired by the people and products ready to move agriculture into its next phase and preserve the environment in the process.

Save the date for May 7-10, 2018, among their guests will be keynote speakers John Kerry, former US Secretary of State.
www.seedsandchips.com
@SEEDSandCHIPS
#SaC18