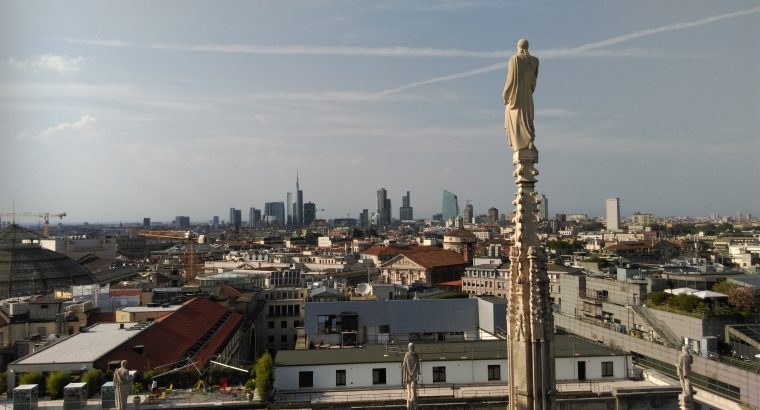 Milan: Mixing Old with the New

As an American, one thing that strikes on your first trip to Europe is the history. The relative age of North America is nothing compared to that of the European continent. Buildings of historical significance here can easily be two or three times as old as the historical sites in the United States.

The same is true about northern Italy and Milan, but there is something here that separates it from many other European cities. It is one of the many things that make it unique. Milan has the ability to mix the old with the new, without it seeming even slightly out of place.

A great example is that of the Piazza del Duomo. In the Piazza, there is a large, magnificent gothic cathedral that looks straight out of the Middle Ages, placed next to the 19th-century arcade, Galleria Vittorio Emanuele II. Across the square, you find the neo-classical Palazzo Reale di Milano with its neighbor from the fascist regime during the early 20thcentury.

This creates an effect that is awe-inspiring on its own, let alone the beauty of the buildings. Many cities have a lot of different architectural styles around the city, but often, you notice the change and think, sometimes out loud and sometimes to yourself, that such things look misplaced, but Milan is different. The Piazza del Duomo does not look inapposite despite it’s mixing of many different styles.

Another example is the Teatro alla Scala, the incredible Milanese opera house. Major renovations to the building between 2002 and 2004 angered preservationists and historians who thought the new structures were too different from the original architecture on the building as modern geometric shaped additions were placed on top of the original 18thcentury structure, but personally, I feel these renovations are fitting for a Milanese opera house.

This point is furthered even by the public transportation in Milan. The city utilizes both old and new trams interchangeably. Here, it is common to find an early 20thcentury tram followed by a modern one. The combination of the two again showcases Milan’s ability to put together what is and what once was with ease.

If you haven’t already, I would recommend hopping on one of the old trams provided you have the opportunity. It is quite honestly like stepping back in time, minus the ticket validator, and is such a neat experience to imagine Milan as it must have been aboard this mode of transportation that is still running today.

While many will come to Italy to be inspired by the historical beauty of Rome, which is incredible in its own right, I believe the ability to place the new next to the old without skipping a beat, makes Milan just as inspiring, if not more. Maybe it is the history nut in me, but I think it can be just as grand to see the progression of human technology as is shown by the constant evolution of architecture in the buildings we desire to construct and as a student in Milan for only a few short weeks, this is what has stood out to me about this wonderful city.