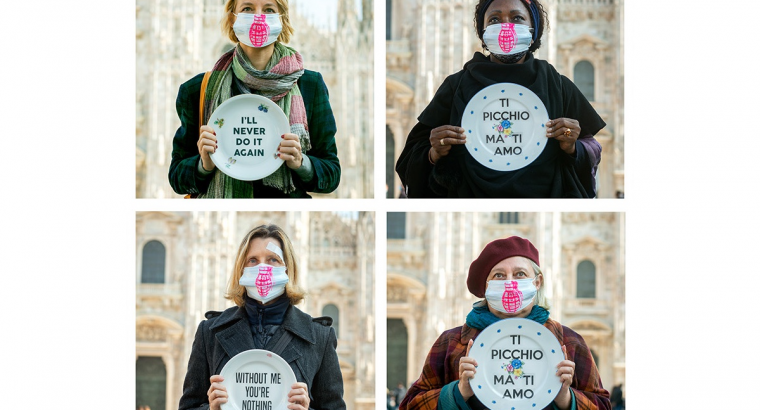 November Cultural Events for the International Day against Violence against Women

Culture is once again at the forefront of the elimination of violence against women this year and, in collaboration with the Commission for Equal Opportunities and Civil Rights, promotes a series of events – shows, exhibitions, installations, performances, meetings – many of which are included in the city’s cultural schedule “The Talents of Women”.

“The chronicle tells us how the pandemic has unfortunately accentuated and brought out with even greater evidence the spread of gender-based violence – declared the Councilor for Culture Filippo Del Corno -. In a year in which the city’s cultural programming is dedicated to the multiform talents of women, it is therefore more important than ever to contribute to the battle for the elimination of violence against women, promoting a calendar of initiatives to induce reflection and to root even more deeply that absolute respect that is necessary for the growth of a civil society “.

ART | THEATER
pacta.org
Thanks to the alliance promoted by the Commission for Equal Opportunities and Civil Rights between the Municipality of Milan and Pacta dei theaters, during the whole day of November 25th it will be possible to follow free streaming of “now free”, a show created by PACTA dei theaters and Soccorso Rosa Onlus, taken from the show ‘Enough now! Instructions against abuse ‘.

The stream will be available on the Theater’s YouTube channel at http://bit.ly/PACTAtube .

ART | PERFORMANCE
www.pacmilano.it
Starting at 9 am and throughout the day, the video of the performance of the Kurdish artist Zehra Doğan “In memory of Hevrin Khalaf” will be broadcast on the site of the PAC Pavilion of Contemporary of his first personal exhibition at the Museum of Santa Giulia in Brescia. During the action, Zehra Doğan paints in front of over 200 people the portrait of Hevrin Khalaf, general secretary of the Syrian Future Party, activist for women’s rights and at the forefront for the recognition of the identity of the Kurdish people, killed the October 12, 2019 by the Arab mercenary militias supporting the Turkish offensive. The pages of the newspaper used to support the work are those of the days when the news of the killing was spread by the media.

The event will be available at  http://www.pacmilano.it/events/in-memoria-di-hevrin-khalaf/ .

ART | EXHIBITION
www.museodelnovecento.org
The Museo del Novecento offers the work of the young artist Silvia Giambrone entitled “Nobody’s room. Indeed, it speaks ”, which reflects on the dynamics of power based on gender that innervate our society. The virtual exhibition is hosted on the Google Arts & culture platform and is conceived as an interactive work-in-progress that can be enriched during the duration of the project (until 6 December) with comments, impressions and the vocal and written contents of the visitors, becoming a sort of “collective community archive”.

The web page, similar to a digital book to browse and discover, is online at https://artsandculture.google.com/story/nobody-s-room-anzi-parla/twLyjcPcFaeOIg and can also be reached directly from site of the Museum.

ART | EXHIBITION, MEETING
www.lecompagniemalviste.org
Throughout the month of November, some structures in the Selinunte – S. Siro district host the widespread exhibition ” Talking women”: five giant posters to raise awareness on the issue of violence against elderly women, an increasing phenomenon that often consumed in silence and indifference. The images communicate with visitors through a QR code and are also available online on the Theater’s Facebook page.

In addition, on November 25th, at 3.30 pm, the talk “The women of Selinunte” will take place, during which the actress Vincenza Pastore will read some texts taken from real stories. Guests will be Ardemia Oriani, provincial ANPI vice president, and Diana De Marchi, president of the Equal Opportunities Commission of the Municipality of Milan. Even from home the public can intervene to share thoughts, experiences and possible solutions.

The talk can be followed in streaming on https://youtu.be/si84oh3q45s .

ART | ONLINE EXHIBITION
www.ihaveavoice.it A
community of women born to support and help women, IHAVEAVOICE, inaugurates an online exhibition on 25 November, which can be visited on the association’s website, which offers works by female artists and investigates, with different techniques and languages, gender stereotypes, the objectification of the female body, physical violence, the isolation of victims and the lack of communication of pain. Paintings, sculptures, videos, installations and prints that intend to involve visitors and visitors, offering a shared message against gender violence with different perspectives.

ART | INSTALLATION
www.silvialevenson.com , www.natalia.saurin.it
A large exhibition of about a hundred kitchen dishes for everyday use in ceramic, decorated with phrases extrapolated from the media to minimize news episodes related to violence or used by the violent to motivate his gesture, which testify to the war too often consumed within the home. “The most dangerous place. Art at the time of Covid ”is the title of the ‘living’ installation that should have been housed in the courtyard of the Royal Palace and was transformed into an action between the Royal Palace and Piazza Duomo. The result was a sequence of photographs that portray the artists Silvia Levenson and Natalia Saurin, mother and daughter, with other women and their dishes.

The images are visible on the websites www.silvialevenson.com and www.natalia.saurin.it .

MEETING
www.biblio.unimib.it
On Wednesday 25th November at 3 pm the book “The web that hates women” by Rossella Dolce and Fiorenzo Pilla will be presented. Far from the splendor of the innovative tools that the Net offers us, a galaxy of groups, chats, forums that grow and feed on feelings of hatred and contempt lives and proliferates, with a single and specific target: women.

The authors talk about it in a meeting broadcast in live streaming on https://www.biblio.unimib.it/it/eventi/violenza-sulle-donne-rete .

MEETING
www.pollicinoonlus.it
On the youtube channel of the association the online meeting “Connecting solitudes. The courage of women” held by Dr. Pace will be broadcast today at 9 pm.