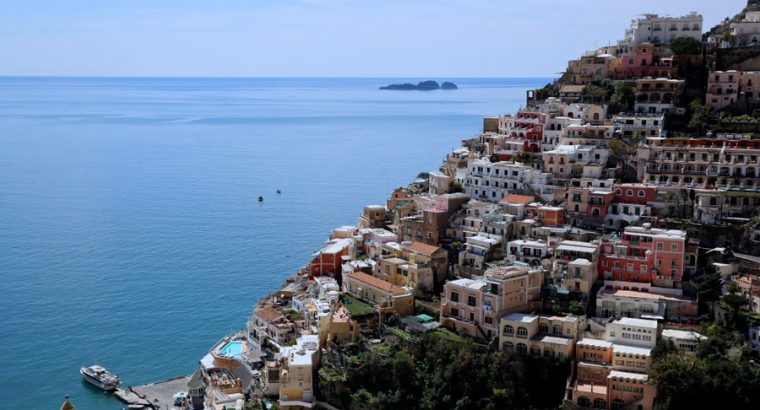 The Octopus and the Wedding Proposal

“How did Salvatore propose?” a friend asked recently, referring to my Italian husband. When I told her that we’d decided to get married in Positano, she said that sounded breathtakingly romantic.
Little did she know.

When you grow up in the United States, you assume that a proposal will involve a man with a ring on one knee. Not so in Italy. I had been living in Naples and dating Salvatore for 6 years, and we had come to Positano to celebrate his graduation from university. Six years of memorizing tomes and sweating bricks, and now he was a free man. Free, I assumed, to marry me and move out of his parents’ apartment. Everything else was immaterial.
But every time I uttered the word marriage, Salva would change the subject.

An expression in Neapolitan dialect that his father taught me helped me to avoid a diplomatic coup d’état and dramatic breakup: ’O purpo s’ha dda cocere dinto a ll’acqua soia. Literally translated: An octopus must be left to cook in its own juice.

After boiling an octopus, you turn off the flame and leave it in its pot, where it continues to emit its own juices. You can write emails or pick up the kids from soccer practice while the big, slimy, puckering animal stews, because the longer the polipo steeps in its own dark pink liquid the better. My future father-in-law taught me this expression that fateful weekend in Positano. When, on Sunday night, Salva hadn’t popped any questions except of the “Do you like the stuffed calamari or the steamed cozze better?” sort, I confided in his parents. Salva was showering after our day at the beach, and I was sitting with my future parents-in- law on the terrace of their apartment. The twinkling lights of Positano were reflected in the blackness of the sea below; the light breeze and smell of lemon trees added to the aura of potential romance. What a perfect setting to dispatch the parents, get on one knee, and present a ring! Any damned ring!

I came out with it: Why does Salva change the subject every time I bring up the idea of getting married? Is it because I’m American? Is it because he wants to stay single, living at home and eating magnificent dishes? “He’s like an octopus,” his father replied. “He has to be left to cook in his own juice.” I was not to pressure him or add any external stimuli, but let him come to the decision on his own. Salvatore is a handsome guy, and I was attached to the image of him on one knee asking for my hand in marriage. Instead, I was presented with the image of a bubbling sea creature who, perfectly content for the time being to stew in the pot by himself, needed to cook for another five years or more.
It came to me in a flash: the whole “Will you marry me?” scene with ring and candlelight is an American tradition: in Italy, they just start planning for the wedding. I was waiting for the Easter Bunny! When I tell Italians about proposals in the States, it cracks them up. We thought that was just another americanata, they say, a cheesy and dramatic exaggeration invented by Hollywood.

Having grown up in fast-paced, do-it-yourself North America, I realize that letting people cook in their own juices is decidedly not my forte. (This is probably why my ragù, even after twenty years in Italy, tastes nothing like that of my mother-in- law.) So, to leave Salva alone and trust him to come to a decision without my prodding was a challenge. I succeeded, I am proud to say, for exactly twenty-one hours after that conversation. I probably would have managed longer, except that I found myself, returning from Positano, in a position in which I thought that I was surely going to die.

“I was just horning! The man is going too slow.”

My puckering polipo and I were returning to Naples in his tiny Fiat, on the narrow two-way coastal road. The view of the crystal-blue ocean five hundred feet below; the sea air coming in the open windows: it could have been an enjoyable and picturesque drive. Except that Salva was speeding like a madman around the curves and actually passing other cars as he honked his horn. (The English verb Salva uses is to horn. As in, “I was just horning! The man is going too slow.”)

I thought this was the moment for our conversation, as it was probably my last.

The octopus was cooked.

Katherine Wilson was born and raised in Washington, D.C., she has lived in Italy for the past nineteen years, working in television, film and theater. She lives in Rome with her husband and two children. You can read more by visiting her website, https://medium.com/@kwilsonwriter.

Check out her book: Only in Naples: Lessons in Food and Famiglia from My Italian Mother-in-Law published by Penguin Random House on April 19, 2016. Copyright © 2016 Katherine Wilson. Available for purchase at Amazon, Books A Million, Barnes & Noble, Indie Bound and more.