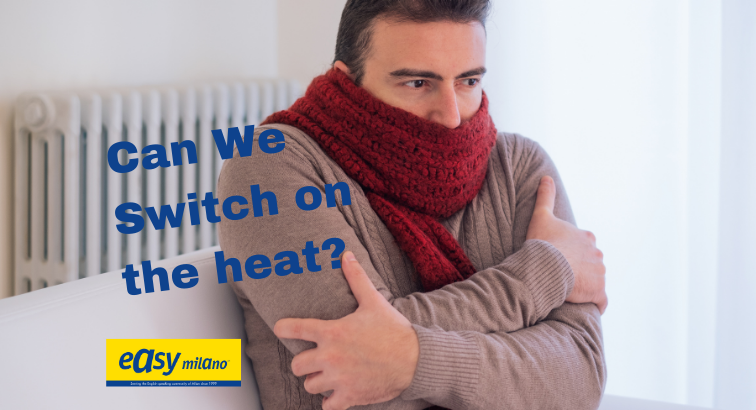 When Can We Switch on the Heating in Italy?

Switching on the heating in Italy is controlled by regional regulations for centralized systems. Residents with autonomous heating should abide by the rules but have a bit more leeway.

It’s already October and temperatures have suddenly dropped. It’s cold and damp and it would be so great right now to have the radiators on!

When it comes to switching on heating systems in Italy there is a distinction made between centralized and autonomous heating systems. The difference is quite important as they follow different rules.

Each region of Italy has an activation date to respect. Northern regions can turn on the heating earlier than regions in the south.

(Normally) Here in Milan, October 15th is when heating systems can be switched on but now in 2022 new dates and restrictions have been announced.

NOTE: UPDATE 2022
In Milan, Turin, Mantua, Brescia and Voghera, turning on the heat has been postponed to  November 3, 2022, in private homes and from November 7, 2022, in public offices. In Pavia, on the other hand, from November 4, 2022; while in Ravenna it starts from November 6, 2022. In central areas such as Vigevano, Bologna, Modena, Rimini and Reggio Emilia it will be possible to turn on the radiators starting November 7, 2022.

Not only is the switch-on date regulated, but also the temperature and number of hours per day the radiators can operate. Radiators should be switched off during the night from 11 pm to 5 am and be kept at a maximum of 20° C (-/+ 2°) in private homes, offices and schools and 18°C in other public buildings.

These regulations were established in an effort to conserve energy and apply to centralized systems where the heating is managed by the building administrator. If you are living in a building with centralized heating, you may not be able to regulate the temperature inside your home.

The climatic zones in Italy are designated A to F, grouping areas with similar climates and temperatures.  The hottest areas are zones A, B and C which include the municipalities of southern Italy such as the provinces of Agrigento, Lampedusa, Porto Empedocle, Catania, Crotone, Brindisi, Benevento, Cagliari, Lecce, Naples, Taranto, Palermo and Reggio Calabria.

The D and E areas are in central and northern Italy, where temperatures tend to drop earlier like in cities and provinces such as Milan, Genoa, La Spezia, Ancona, Florence, Lucca, Rome, Chieti and Pescara.

The last group, F, groups together the provinces of Belluno, Cuneo and Trento.

Here is a summary table with all the dates to remember, except for any postponements and local ordinances to be verified.

2022 UPDATE
Due to the economic crisis and the Russia/Ukraine conflict, energy prices in Italy will be affected. New restrictions for 2022 aim to save approximately 2.6 billion cubic meters of gas in homes and over 60 million cubic meters in shops. However, hospitals, retirement homes, schools, swimming pools, saunas and industrial activities are encouraged to comply but do not have any formal recommendations.

Zone F, part of some of the most northern areas, do not have any restrictions on heating system use.

Check the climatic zones in Italy chart to find out when you can switch on the heating in your area.

Considered a waste of energy, it is normally expected that heaters remain off during the night between 11 pm and 5 am.

Each climatic zone in Italy has a maximum number of hours the heating can operate:

In extreme cold or a sudden drop in temperature, exceptions are conceded. Often in these cases, the local city hall will announce new allowances.

Exceptions are also provided for all buildings with a heat system metering, where there is a centralized form of heating or where an energy service contract has been stipulated.

Refer to law n. 10/1991 (Rules for the implementation of the National Energy Plan regarding the national use of energy, energy saving and development of renewable energy sources) and Dpr n. 412/1993 (Regulation laying down rules for the design, installation, operation and maintenance of the thermal systems of buildings for the purpose of containing energy consumption).