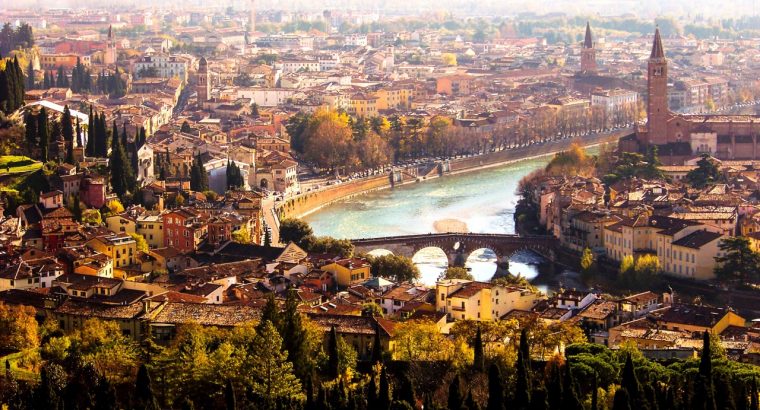 What better way is there, than to spend Valentine’s Day in Verona, Italy’s city of love? Begin the tour at Castelvecchio (corso Castelvecchio 2). This medieval castle with its brick exterior and turrets is a wonderful architectural gem which houses an incredible collection of Medieval and Renaissance art. During your visit, take some time for a stroll across the Ponte Scaligero for a better look of the castle and the whole city. After your visit, head towards Piazza Bra where you’ll find the beautiful Arena. Built in the 1st century, this is the third largest Roman amphitheater. It can accommodate 30,000 spectators and is used during the summer months for several opera performances.

After a peek inside the Arena, continue your tour to Verona’s main square: Piazza delle Erbe. This irregularly-shaped square is lined with restaurants and a few market stalls, take your pick and stop for lunch. In Roman times, the forum was held in this square, at the Domus Mercatorum near the center of the square. Be sure to spot the fountain with the Madonna Verona which was also constructed during Roman times. At the far end of the square you’ll notice a column with a winged lion, the symbol of St. Mark and the city of Venice.

Booking.com: Search for hotels in Verona

Next stop will be the Torre dei Lamberti, the tall bell tower visible from Piazza delle Erbe (Via della Costa 1). Take the lift for a breathtaking view of the city from a height of 84 meters. Exit Piazza delle Erbe along the Southern side on Via Cappello for a mandatory stop: Juliet’s House (Via Cappello 23). Although it is not the actual setting of Shakespeare’s play it is well worth a visit even if it is just to drop off your letter. On the courtyard you can see the famous balcony as well a lovely bronze sculpture of Juliet, be sure to rub her breast for luck in love! Romantics can proceed to the site of Juliet’s Tomb in the former convent of San Francesco (Via del Pontiere 35) just a short walk from here.

Day two begins at the far end of town across the Adige River in the Giardino Giusti (Via Giusti 2). Enjoy a morning stroll along the magnificent gardens of the Giusti family popular among the likes of Mozart and Goethe. From here, head towards the Roman Theater (Via Redentore 2). The theater was built on a hillside on the 1st century and overlooks the River. Like the Arena it is still in use, especially in the summertime.

Proceed across the river to Verona’s Duomo (Piazza Duomo 21), a Romanesque masterpiece with Titian’s The Assumption of the Virgin. Continue along Via Duomo to the church of Sant’Anastasia with its brick exterior, arched entrance and rose window. This is perhaps one of Verona’s most visited churches with its beautiful interior and frescoed chapels.

Next stop is the Galleria d’Arte Moderna (Cortile Mercato Vecchio), located in the Palazzo della Ragione which features artworks by Boccioni, Hayez and Warhol to mention a few. Don’t leave town without trying some of the delicious specialties which include Pasta e Fasoi(pasta dish with beans) or Risotto all’Amarone made with Amarone di Valpolicella, a local red wine.

Tip: For a sightseeing visit, we strongly recommend you opt for the Verona Card, which offers free admission to most sights including churches, which in Verona require admission to enter. Choose from 18 Euros for 24-hour card or 22 Euro for 48-hour card depending on your visit. The Verona Card can be purchased in the ticket office to main landmarks. More info is available on: http://www.turismoverona.eu/nqcontent.cfm?a_id=38678