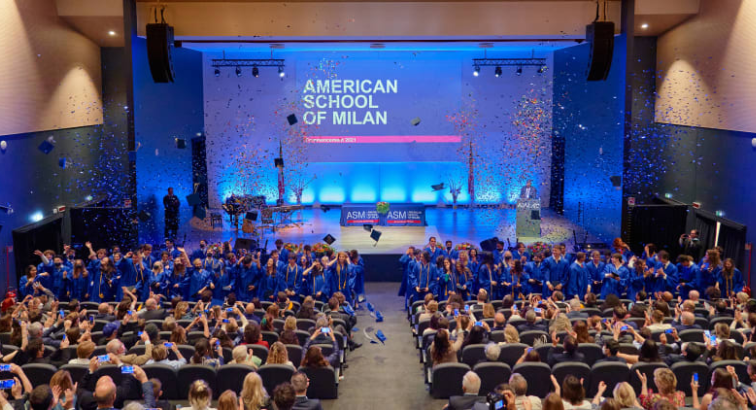 60 Years of Quality Education: The American School of Milan

This year marks the 60th anniversary of The American School of Milan (ASM).

The American School of Milan (ASM) was established in 1962 by a group of forward-thinking American expatriate parents. ASM was one of the first international schools in Milan and remains committed to its founding principles of diversity, inclusivity, and excellence in education. ASM is a private, non-profit school that provides an American-style international education for students aged 3-18.

In 1962, ASM opened its doors in downtown Milan to just 17 students. In 1976, due to growth in numbers, ASM moved to its current campus in Noverasco di Opera and now hosts a diverse student body of 840 students from over 50 countries. The nine-acre campus has three main buildings with facilities including a film studio, a library/media center, 70 classrooms, science laboratories, two full gymnasiums, music rooms, art suites, a spacious cafeteria, a 500-seat auditorium, dance studio, a large soccer field, outdoor tennis and basketball courts.

ASM offers a full scope of education from 3 years to 18 years. Since 1983, ASM has been recognized as an IB World School making it one of the first to offer the program in Milan. The Diploma Programme (DP) is available in years 11 and 12. ASM is also accredited by the Middle States Association of Colleges and Schools and offers an American diploma to graduates in 12th grade.

ASM and its relationship with Milan

Milan is one of the most international cities in the world. The city is home to a large number of multinational companies and organizations, and its residents come from all over the globe. In addition to being a major financial and business center, Milan is also a popular tourist destination, with millions of visitors each year.

In 2015, Milan became globally recognized when it hosted the World Expo, and its growth and expansion has made it a culturally diverse city. Favorable tax reforms for companies and individuals has Italy ranked 9th in the Global FDI Confidence Index 2020, before Switzerland and Spain making it an advantageous location for international companies.

Over 60% of ASM students are children of expats living in Milan or from families who are here temporarily working for consulates, multinational corporations, in finance and the fashion industry. Approximately 25% of the students are Americans, with 38% host nationals. The remaining students come from 52 countries in Europe, South America, Africa and Asia.

Much of the ASM’s success is due to its relationship with the city of Milan. Cynthia Davis Hall, Director of Admissions and Advancement at the American School explains, “The growth of Milan as a city has largely mirrored our growth as well. The development of Milan as an international hub for business, technology, higher education and academic research has given us the opportunity to provide educational support for the international families who have relocated to Milan. It is because of this we have become one of the most diverse and international schools in the city.”

Over the years, ASM has made local headlines for the numerous awards they have achieved, such as being awarded certification as an Eco school in 2021 and being certified by the IBO as a top EU IB school the same year.

ASM Director, Wayne Rutherford, says “It’s certainly nice to get the recognition, but what is important is how a school and its values impact a student’s future. Our programs produce reflective, caring, principled young people. The ASM programs, activities and curriculum are designed to enrich, educate, and provide students with the knowledge and skills to build a successful future.”

One of the pillars of the American School of Milan is its emphasis on technology use; elementary students are already using iPads, and once they reach middle school, each student has access to his or her own computer for all assignments. Long before the pandemic, the American School of Milan was one of the first schools in Europe to become a “laptop school,” meaning that students could access their work, programs, and their teachers from any computer.

“When the Covid-19 lockdowns were imposed, it took us only a few days to set up the remote learning programs. Essentially, we were already up and running. Our students didn’t miss a beat and it was a crucial element in keeping up morale during a very trying time,” commented Rutherford.

Recently, students from the American School of Milan participated in and hosted the first Privacy Debate Championship which was held on September 27, 2022 at the school auditorium. Privacy Week was organized to inform people about the challenges, rights and protections we face living in the digital age and to help them understand the impact this will have on everyday life and on privacy.

MITA, the Milan International Teachers Association was created in 2015 by ASM teachers to share expertise among the many schools in the region of Northern Italy. Each year the association holds a two-day conference on learning, connecting and reflecting.

The next MITA conference will be held March 24th-25th 2023 at the American School of Milan. Teachers from all over Europe meet to exchange ideas, teaching methods, hold workshops, discussion sessions, and networking.

Why do parents choose an international school?

An independent study by ISC Research found that students at international schools tend to receive personalized instruction from teachers – mostly as a result of a lower student-to-teacher ratio. The report states that this allows for more potential for the student voice, and fewer behavior problems and classroom management demands.

Students who attend an international school are exposed to different cultures and languages. This can help them to become more open-minded and tolerant of others. Additionally, international education can prepare students for studying abroad and jobs in the global workforce. They will learn how to work in teams and with people from different cultures and backgrounds.

ASM Parent, Vittorio Bonari says, “There are so many reasons for why we decided to embrace ASM and I can say it wasn’t just for the language. We’re relocating back to Milan from London and basically, we wanted to embrace the program. It’s so rich, it’s open-minded, and it’s really preparing our children for a modern society and economy. When I look at my children and the way they interact within the American School I see it’s an amazing place preparing them to become citizens of the world.”

American School of Milan (ASM) is hosting visits to the school on:

Learn more about the American School of Milan or schedule a visit on their website asmilan.org