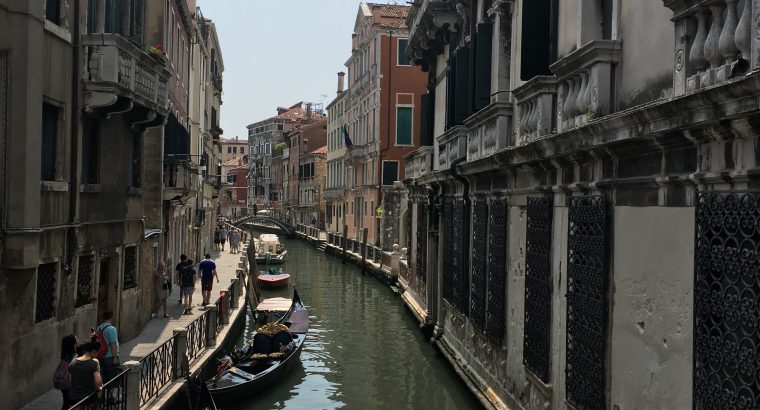 A Tale of Two Cultures

When coming from America to live in Italy there are many differences between the two countries to adjust to. There are obvious ones that are known before coming such as it being much hotter in Italy during the summer than most places (especially compared to my home in the Northeastern U.S.), but there are many differences between the countries not realized until you live in the city.

I lived in Milan for the duration of my stay and one of the first things you notice is the way people dress in the city. In a fashionable city like Milan people always try to look nice, which means lots of dress pants and button-down shirts for men and trendy outfits for women. Even when it’s hot out, the attire isn’t altered. I’ve had Italians describe themselves and their dress code to me as similar to onions, with many layers and it takes a long time to peel off the long sleeves or pants, if ever. When washing your clothes also be prepared to hang them because dryers are rare here. Italians are very aware of energy conservation so this is just one of the many ways they try to do that.

Another difference between the two cultures is the way pizza is both made and consumed. When it’s made in Italy, a “plain” pizza is called a Margherita pizza. It’s most often made with a few slices of mozzarella placed on top of the tomato sauce and a basil leaf, not with shredded mozzarella like in the states. Instead of being cut up in slices, the pizza comes in a personal size for each person and the proper way to eat is with a fork and knife. I’ve seen a few people in the States do this, but it always seemed cumbersome and unusual to me. After a couple of weeks though, you get used to eating pizza this way and I’m proud to say I can now make quick work of any pizza Milan throws my way.

One of my favorite traditions in Italy is the aperitivo, which is particularly popular in Milan where they are renowned for large spreads of food. Aperitivo is an Italian tradition where at around 7-7:30 you pay around €10, depending on the place, for a drink and a spread of finger-type food that is brought to you. This can include meats, cheeses, focaccia (a type of bread), pizza, and many other things. It is a great way to relax after work with friends and generally is like an appetizer for dinner, which starts later than the average American dinner.

In America, dinner is generally around 5:30-6:30, but in Italy dinner generally starts between 8:00-9:00 and lasts longer. There is an emphasis on conversation and enjoying time with those you are eating with. One thing I have enjoyed is that servers don’t hound their customers at restaurants. There is no “how is everything” while you are still trying to eat your first bite, or semi-scripted conversations between the customer and server. The staff lets you be and stays out of your dinner. The order of a meal is also different in Italy. Italians do not like their foods to touch, so they come in different courses. There can be different variations, but a basic meal would start with antipasto, meats and cheeses, followed by primo, some type of pasta usually, and finally secondo, which is a heavier course of meat or fish. This is all followed of course by dolce, which is dessert.

Another dissimilarity that is often discussed by Americans in Italy is the location of the toilet flusher. Until I came to Italy I did not realize that the flusher being located on the left side of the toilet (when facing it) was not universal. Within Italy, not only is it not on the left, it isn’t even always in the same place elsewhere. I’ve found flushers on the floor, hanging from the ceiling, the walls on either side of me, on top of the toilet; the list goes on. It’s always an adventure using the restroom and wondering where the flusher will be.

My final observation is about dogs in Italy. The policy on where dogs can go in Italy is much different than in America. Metros, stores, restaurants, apartments, and more are all perfectly fine for owners to bring their canine into. This is a sharp contrast to America where dogs can’t go in most places of business and some apartments or may have to be in a crate on the metro. Maybe I’ve been lucky as well, but it also seems like Italian dogs behave way better than those in America. Hardly ever in my time here did I hear a dog bark in public, and owners were almost always relaxed and having no problems with them. At restaurants, they just sit patiently, quietly and enjoy the scenery.

A lot of the differences I found between the two cultures surprised me. Sometimes it was because I could never imagine myself replicating the ability of the Milanese to wear a jacket in the summer and seem comfortable. Sometimes because, like in the case of the toilet flusher, I had never been exposed to something different. Whatever the circumstance, I thoroughly enjoyed experiencing Italian culture.

It is rich in history and tradition, welcoming to visitors like myself, and I will always remember the friendliness and authenticity of the people I met along the way. Whether it was Piero, the enthusiastic old man I spoke to using gestures and Google translate for a couple of hours on a train to Florence, or Luca, the pizza shop owner in Rome who sat with my friends and me, giving us nicknames and free drinks. I was struck by how our common humanity went deeper than our different cultures.