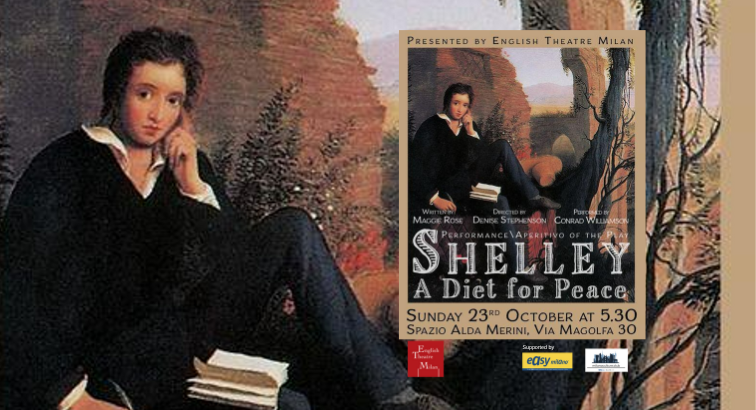 “Shelley. A Diet for Peace” – Preview

This year is the bicentenary of the death of Percy Bysshe Shelley, the Romantic poet and radical who drowned in a storm off the coast of Viareggio aboard his boat, the Don Juan, with his friend, Edward Williams, and their boat boy. Among the many events being held to mark the date and to celebrate Shelley’s short but remarkable life, is a new play by Maggie Rose of English Theatre Milan. The one-act drama, Shelley. A Diet for Peace, which was staged in May by students in La Spezia, will receive its Milan premiere at the Spazio Alda Merini, V. Magolfa 30, on Sunday, October 23rd at 17:30.

Performed by Conrad Williamson and directed by Denise Stephenson, Shelley. A Diet for Peace takes the form of an imaginary dialogue between the poet and a modern-day Scottish journalist sent to Italy to cover the bicentennial commemorations. Maggie Rose, who turned to Prof. Lilla Maria Crisafulli for her specialist advice, places Shelley centre-stage and reveals how his radical views are still stunningly relevant today. “He realised that everything on our planet is connected; what we eat and how we behave impact not only on our life, but also on that of others and on the environment. Hence his vegetarian, non-alcoholic diet, and his anti-establishment views on war, love, politics and the environment.”

Shelley’s views and behaviour were so extreme that he was known as “Mad Shelley” at school (where he experimented with gunpowder and electricity). The importance of vegetarianism was one of his many ideas regarded as eccentric by his contemporaries. Of course, the poet’s choice of diet was much more than a lifestyle choice. It sprang from the same source as his radical beliefs, which set him apart from his contemporaries at Eton College and later at the University of Oxford, where he was sent down after publishing a pamphlet advocating atheism.

Much like many modern vegetarians and vegans, Shelley linked a vegetable-based diet not only to health, but also to ecology and economic justice. He argued in his Vindication of a Natural Diet that if people ate the products of farm fields themselves rather than inefficiently using them to fatten animals, they could stop “devouring an acre at a meal” and end “the long-protracted famine of the hard-working peasant’s hungry babes.”

Shelley’s personal life was chaotic and passionate. Were he alive today, it would be the stuff of “Heat” and the Daily Mail’s “sidebar of shame”. The son of a wealthy English family, Shelley could have lived a quiet, comfortable existence, but that was never his intention. Even from an early age, his ideas about social justice, nature, personal freedom and expression led him to rebel against the shackles of conformity and middle-class morality. Set against the backdrop of the French Revolution, his intellectual growth led him increasingly towards a radical standpoint that placed him at odds not only with his own staid aristocratic family but with the authorities, who regarded him as a dangerous subversive.

The Romantic poets provided the model for later artistic and political radicals, from the Bloomsbury Set to Bernard Shaw and the flower children of the 1960s. Even the punk scene of the late 70s owes something to the Romantic movement: an adolescent contrariness that its exponents have never grown out of, culminating in an adult rejection of the values of middle-class capitalism, orthodoxy in religion and conventional attitudes towards relationships and sex.

While Shelley’s political and social ideas are still highly influential, his fame owes more to his poetry, especially his lyric poems and odes, such as Ozymandias and Ode to the West Wind, which compares the powerful airstream to “the trumpet of a prophecy” and ends with the famous line “O Wind, / If Winter comes, can Spring be far behind?”

Shelley. A Diet for Peace forms part of a larger narrative that informs Maggie Rose’s dramatic works and prose: her play Ophelia, Herb-woman, which featured in English Theatre Milan’s mini-season at the Gerolamo Theatre earlier this year, shares some characteristics with the current piece. Breaking the fourth wall and addressing the audience directly, the protagonist of Ophelia is a woman dealing directly with the issues of patriarchy in Elizabethan England. The play also recognises the importance of man’s – and woman’s – relationship with nature and the environment. This theme is developed in Rose’s short monologue spoken by Caliban from Shakespeare’s The Tempest in Play Your Part, a collection of short theatrical pieces that take their lead from a series of multidisciplinary online seminars dedicated to climate change, which the Public Engagement Office of the University of Milan organised in early 2021.

You can book for Shelley. A Diet for Peace by making a 5 euro donation to English Theatre Milan (for ETM members the show is free), while an aperitif can be purchased on the door at Spazio Alda Merini, V. Magolfa 30, on Sunday October 5th at 17:30.

You can find out more about English Theatre Milan and its complete programme of events by visiting its website, englishtheatremilan.org. 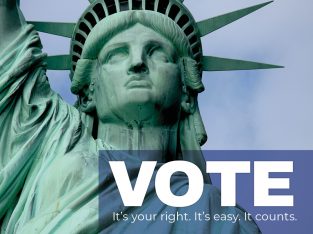