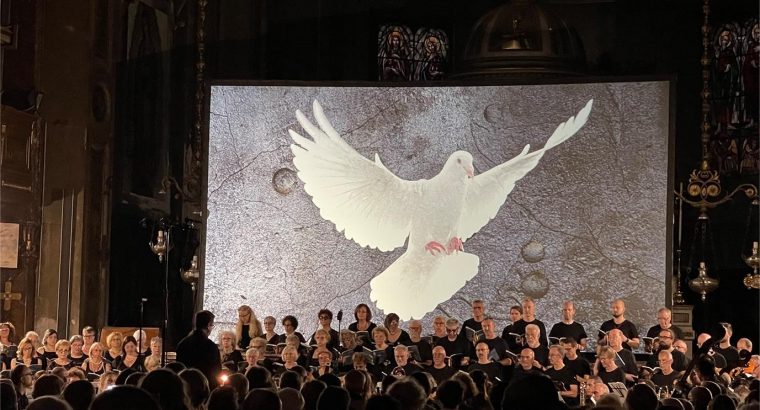 The Armed Man, A Mass for Peace

As Russia’s war in Ukraine continues to exact its appalling cost in terms of human lives and suffering, this was an opportune moment for hundreds of people in Milan to come together and demonstrate their solidarity and support for all victims of war and refugees through a deeply emotional shared musical experience.

The Armed Man – A Mass for Peace is a work for choir and orchestra by contemporary Welsh composer, Sir Karl Jenkins, who was a key member of the prog rock band Soft Machine in the 1970s and 80s. He subsequently composed classical and choral music, including the song Adiemus. Originally commissioned in 2000 by the UK’s Royal Armouries Museum, The Armed Man – A Mass for Peace is dedicated to victims of the conflict in Kosovo. It is the most performed work by any living composer.

Sir Karl Jenkins speaking at a conference at the Historical Archive of Arco Town Hall, 2016

Canti Corum, the Milan-based choir under the direction of Maestro Vincenzo Simmarano, and the Orchestra Sinfonica di Lecco performed the Mass at a concert held on Tuesday 14th June in the Basilica di Santo Stefano Maggiore, Milano, in aid of the peace and humanitarian works of the Comunita’ di Sant’Egidio, specifically its “Humanitarian Corridors” project. Canti Corum was formed in 1998 by a group of music lovers from diverse backgrounds and musical experiences. Its leader, Simmarano, has also arranged pieces for the choir, which is committed to expanding its repertoire to include polyphonic music, folk songs, a cappella and performances with instrumental accompaniment. Canti Corum is also extremely active in promoting awareness of peace-related issues through sensitive repertoire choices and regularly performs charity concerts in Milan and other cities. In December 2011, the choir was awarded the Medaglia di Rappresentanza of the President of the Italian Republic for its “COROinBALLO” project, which involved children with disabilities singing and dancing.

The Mass is a compendium of widely varying musical styles and genres. It moves through brooding orchestral passages reminiscent of the Mars section of Holst’s The Planets suite, lofty liturgical anthems, the plaintive chanting of a muezzin, gut-wrenching and stirring sections that act like film music on the listener, especially when experienced with the video images of conflict and destruction, the euphoria of victory and the return of peace, sombre reflection and a final resolution with soaring, transcendental harmonies accompanied by images of the globe and peaceful skies. Both the choir of Canti Corum and the Orchestra Sinfonica di Lecco were outstanding and Vincenzo Simmarano’s direction brought out the best of the singers and musicians. It’s difficult to find an exact comparison for The Armed Man, but it’s significant that a lot of Jenkins’s most well-known compositions have been for adverts and cinema. As with the film music of Ennio Morricone and John Williams, however intellectual you might be, if you are human, your body responds irresistibly in an instinctive, visceral way. The emotions evoked are powerful and real, even if, at times, you suspect you are being manipulated by a master of tugging at heart strings and touching nerves.

The texts used in the Mass are also eclectic. It’s title, The Armed Man, comes from a 15th-century French folk song L’homme armé, with its chilling refrain “The armed man should be feared”. In addition to extracts from the Mass, the piece uses texts from other religious and historical sources, including the Islamic call to prayer, the Psalms and Book of Revelation from the Bible as well as the great Indian epic poem the Mahabharata. Writers whose words appear in The Armed Man include Rudyard Kipling, Alfred Lord Tennyson and Sankichi Toge, who survived the bombing of Hiroshima but died some years later of leukaemia.

The Basilica of Santo Stefano is one of Milan’s great interiors, both imposing and intimate, with acoustics that heightened the rich sonorities of the music, including the superb voice of mezzosoprano Giulia Taccagni. A highly appreciative audience listened to the performance, which was accompanied by a film shown on a huge video screen erected behind the choir and orchestra. The film is a montage of clips from documentaries, propaganda reels from the 20th century and news reports showing all aspects of war, including footage of political speeches, rallies, manufacturing armaments, conscripts boarding trains, scenes from the battlefield, bombing, genocide and humanitarian disasters right up to the present day. There is a section focusing on refugees and people displaced from their homes by war. Produced by Hefin Owen and edited by Chris Lawrence and Gareth Owens, the film on its own already provides a harrowing account of war throughout the last century and into the present one. However, combined with Karl Jenkins’s score, the overall impression is devastating and visceral. According to composer Declan Townsend, “When these skills [the performers’] are combined with an inventive text and a backdrop of film images of war, pictures of political leaders who have sent their armies to war and images of the frightful consequences of war and terrorism, the emotional impact is overwhelming…”.

Emerging from the coolness of the church into the warm Milan evening air, I felt I had been through a profound emotional experience. Listening to The Armed Man – A Mass for Peace and watching the film leaves you feeling as if you have actually lived through a war, even if (thankfully in my case) only vicariously. The question you are left asking is the one that appeared on a poster of a solider being shot in Vietnam, an image which appeared in a million bedrooms and university halls in the 1980s: “Why?”

Over the years, Canti Corum has grown into a large international choir with singers from many nationalities coming together. Some even flew in from the UK just to sing in this Mass for Peace, which is believed to be a premiere performance of Sir Karl Jenkins’ work in Milan. The concert had originally been planned for June 2020 but was postponed twice due to the pandemic.

All the British institutions and community in Italy, including the British Embassy, the British Consulate, the British Chamber of Commerce and the British Council are endorsing the project which they see not only as bringing some contemporary British culture to Milan, but also as a way of promoting UK-Italian and international relations, while also offering practical help to a good cause. Easy Milano has also supported the Mass for Peace as a media partner. Most critically, the concert is a way of supporting the humanitarian and peace works of the Comunita’ di Sant’Egidio, a lay Catholic association dedicated to social service, founded in 1968 under the leadership of Andrea Riccardi. The organisation has grown to become an important international network of local communities. It supports lonely and non-self-sufficient elderly people, immigrants and the homeless, the terminally ill and HIV/AIDS patients, children at risk of deviance and marginalisation, refugees and the physically and mentally handicapped, drug addicts, victims of war, and prisoners. The community also has a high profile in the area of peace negotiations, addressing the AIDS epidemic in Africa, and in its opposition to capital punishment. It takes an ecumenical approach in all of its work.

Robert Dennis is a writer and Business English teacher based in Milan. He has been teaching for other 30 years both in the UK and in Italy. A long-time collaborator with John Peter Sloan, Robert published Business English (Gribaudo) in 2020. The book was launched with “Il Sole 24 Ore” and sold in newsstands throughout Italy. Robert has a website for people who want to learn Business English: Pay As You Learn.com. The site features keywords and phrases, audio and exercises to help professionals improve their language skills. A graduate in English from Oxford University, Robert is also a copywriter, translator and a “buongustaio” who loves Italian food!