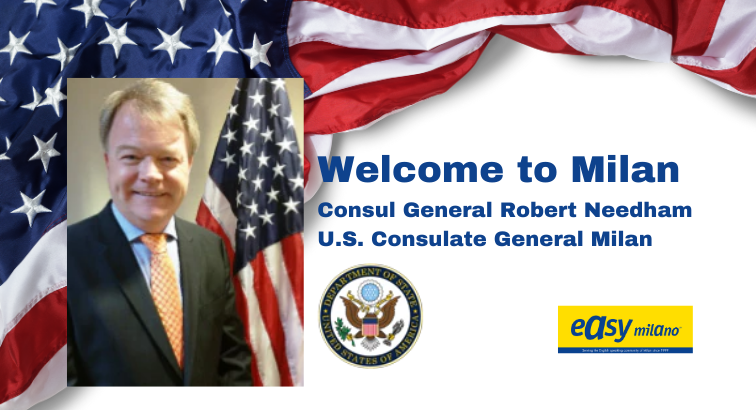 Easy Milano would like to extend a warm welcome to Consul General Robert Needham who has taken office early this month at the U.S. Consulate in Milan. We wish you all the best and support you in all efforts of your diplomatic mission.

Consul General Robert Needham assumed his duties in Milan on October 2, 2020. He has been with the U.S. Department of State since 1991 and is a member of the Senior Foreign Service with the rank of Minister-Counselor.

From 2017 to 2019, Mr. Needham was the Executive Director for the Bureau of European and Eurasian Affairs and for the Bureau of International Organization Affairs at the State Department in Washington, DC. Mr. Needham has worked extensively overseas and has had postings at U.S. missions to Poland, Oman, Croatia, England, Denmark, Ukraine, the U.S. Mission to the United Nations in Geneva, Belgium, and Afghanistan.

Born in England, Mr. Needham grew up in Northern Ireland until immigrating to the US in 1979 where his parents settled in Wisconsin. He received a BA in Political Science from Ripon College in Wisconsin, and an MA in International Relations from the Maxwell School at Syracuse University. Prior to joining the State Department, Mr. Needham worked as a Management Consultant.

Mr. Needham is an avid reader and soccer fan. He is also a certified soccer coach and has coached kids’ soccer in Switzerland, Ukraine, and Denmark. He and his wife, Aleksandra, have one son, who is currently a graduate student at Syracuse University’s Maxwell School.

Consulate General of The United States of America, Milan, Italy