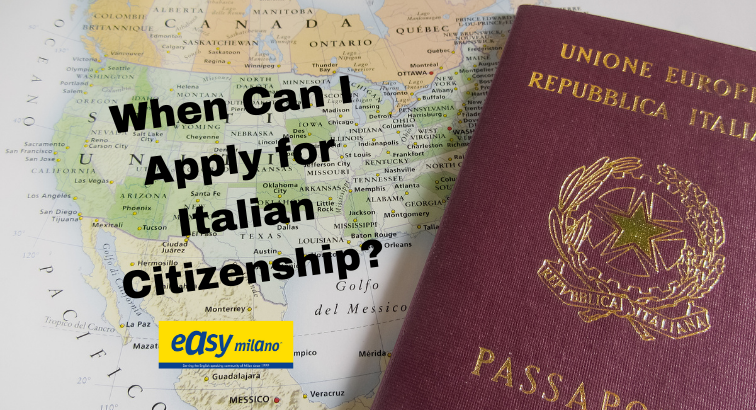 When can I apply for Italian dual citizenship after residency?

One of our Easy Milano subscribers who has been living as a permanent resident in Milan wrote in asking:

” I obtained permanent residence in Italy in November 2016. When is the earliest date at which I can apply for dual citizenship?”

The answer depends on your nationality or refugee status.
If you are an EU member state citizen, you may apply for Italian citizenship after four years of residency in Italy (see 1d). A stateless person who has been legally residing in Italy for at least five years can apply for Italian citizenship (see 1e). A Non European citizen who has been legally residing for at least ten years in Italy (see 1 f).

Granting of Italian citizenship for residence on Italian territory pursuant to art. 9 of the law n. 91 of 5/02/1992

This is the official answer from the Ministero dell’Interno – Interior Ministry Home Office, Italy

1. Italian citizenship can be granted by decree of the President of the Republic, after consulting the Council of State, on the proposal of the Minister of the Interior:

a) to a foreigner whose father or mother or one of the ascendants in a straight line of second degree were citizens by birth, or who was born in the territory of the Republic and, in both cases, have legally resided there for at least three years, in any case without prejudice to the provisions of article 4, paragraph 1, letter c);

b) to an adult foreigner adopted by an Italian citizen who has legally resided in the territory of the Republic for at least five years following adoption;

c) the foreigner who has served, even abroad, for at least five years in the employ of the State;

d) a citizen of a Member State of the European Communities if he has legally resided in the territory of the Republic for at least four years;

e) a stateless person who has been legally residing in the territory of the Republic for at least five years;

f) to the alien [Non European citizen] who has been legally residing for at least ten years in the territory of the Republic.

2. By decree of the President of the Republic, having heard the Council of State and following a resolution of the Council of Ministers, on the proposal of the Minister of the Interior, in agreement with the Minister of Foreign Affairs, citizenship can be granted to the foreigner when the latter has made eminent services to Italy, or when there is an exceptional interest of the State.

The conversion law 1 December 2018 n. 132 of Legislative Decree 4 October 2018, n. 113, provides for the requirement of knowledge of the Italian language for applicants for Italian citizenship by residence.