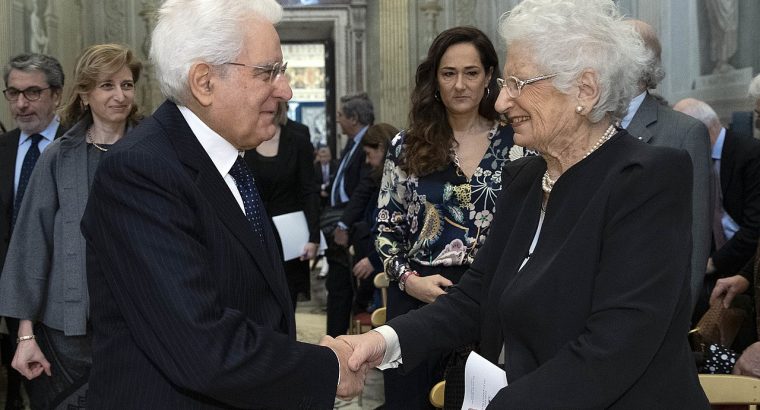 Italian women are recognized around the world for being passionate and resilient. It is a large part of their character. Throughout history, they had to deal with a society that has often pushed them aside. But their creativity and immense strength have empowered them to become leaders and role models for younger generations. History is dotted with Italian women who have made a difference and inspired change in Italy and throughout the world.

Rita Levi Montalcini, Maria Montessori, Anna Magnani, Margherita Hack, are some of the names we are familiar with, but it’s not just about the past. Many Italian women continue to leave a mark on society today.

Here is our selection of 7 inspiring Italian women who work every day to get what they want and to make the world a better place for men and women.

Liliana Segre is a Holocaust survivor known for her political and social commitment to keeping alive the memory of the massacre of the Jews during World War II. Born in 1930 in Milan, she was expelled from school in 1938 and was on the last train from Milan to Auschwitz. She was set free in 1945 by the Red Army and was the only survivor in her family.

Her political commitment officially began in 2018, when the President of the Italian Republic, Sergio Mattarella, appointed her senator for life on the 80th anniversary of fascist racial laws. To date, she is the fourth woman to have been appointed senator for life and a clear example of strength and resilience.

At the age of 91, she continues to speak at schools and conferences, has told her story by authoring several books and media channels such as RAI, FRANCE 24 and BCC have filmed documentaries about her life.

Speranza Scappucci is one of the most talented orchestra conductors in the world.

A native Roman, she graduated in piano and conducting at the Santa Cecilia Conservatory in Rome, followed by studies at the Juilliard School in New York.  Since then, she has worked in prestigious theaters all over the world.

In November 2016, she conducted Rossini’s Cenerentola (Cinderella) at the Vienna Opera, the first Italian to get on the prestigious podium. And at the beginning of 2022, she was the first woman to direct an opera at the Teatro della Scala.

Speranza is not only a talented woman, but she is also lively and charismatic. She conducts the orchestra with extraordinary grit. When working she wears a pair of comfortable shoes, but at the end of the show before taking the stage for her applause, she lets down her auburn hair and changes into her signature pair of red high heels.

Born in the province of Mantua in 1959, Mariangela Zappia is the first Italian female ambassador to the USA, appointed in 2021.

But that is not the first time that Zappia holds such a prestigious and strategic role. Since she entered the diplomatic career in 1983, her path has been surprisingly rich and a true example of what a woman can achieve while living her personal life to the fullest.

Having held numerous diplomatic posts worldwide, including First Secretary in Dakar and Adjunct Consul in New York, in 2014, she was the first Italian woman Ambassador to NATO, and in 2018 the first woman in 70 years to represent Italy at the United Nations.

In addition to becoming one of the most influential Italian women in the world, she also managed to raise two beautiful children.

She started fencing when she was only five years old. But at the age of 11, she was struck by severe meningitis that caused her necrosis. The only way to save her life was amputation of her forearms and legs. After a lengthy hospitalization and rehabilitation, she decided this would not discourage her and returned to fencing.

Her talent and her courage are also recognized abroad. She posed for photographer Anne Geddes for a campaign in favor of vaccinations against meningitis and was invited by Barack Obama to his final administrative dinner. The toy company Mattel has also created a Barbie dedicated to her; a collector piece to share her inspiring story which can be an example for many little girls.

Anna Gregorio is an associate professor of Astrophysics at the University of Trieste. She graduated in Physics in 1992 with a Master in “Space Systems Engineering” and was nominated by Forbes Italy among the “100 Most Successful Italian Women” in 2020. In 2021, she was included among the “50 Most Influential Women in the World of Technology in Italy.”

For the past ten years, she has been coordinating the instrumental operational groups on the Euclid and Planck missions of the European Space Agency. She is a consultant for various organizations and the CEO of PICOSATS, a spin-off company of the University, operating in the field of small satellites.

Flavia Pennetta is one of the best Italian tennis players of all time. Before retiring in 2015, she won several titles. In 2009, she became the first Italian woman to enter the top 10, and in 2011, she became number 1 in the world in doubles.

She achieved her stunning success in 2015. She showed up at the US Open as the twenty-sixth seed in the main draw. After beating world number 2 Simona Halep, she qualified in a Grand Slam final for the first time. Her opponent was long-time friend Roberta Vinci in an unprecedented all-Italian final. Pennetta became the second Italian, after Schiavone, to win a Grand Slam tournament.

After a fulfilling career as a tennis player, she is now a Sky commentator and mother of two.

Samantha Cristoforetti is an Italian astronaut and engineer and the first Italian woman to go into space.

She graduated in mechanical engineering in Munich and then attended the prestigious Pozzuoli Aeronautic Academy, where she received the title of Officer in 2005. Not satisfied with her academic career, she decided to expand her curriculum with a new degree in Aeronautical Sciences in Naples.

In 2009, the European Space Agency (ESA) chose her to carry out missions, becoming the first Italian woman and the third in Europe. Her first mission was in 2014 to reach the International Space Station. Only 6 Italian men preceded her in this operation.

Through her detailed diary, Samantha Cristoforetti has managed to bring the world of science to the public. Her story has also become a documentary film.

These are just some of the Italian women who, every day, work to achieve their goals and to make the world a better place for all of us.